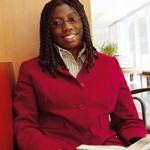 “I believe that what an individual does with his or her life matters,” wrote Yaa Hemaa Obiri-Yeboah in her essay to the Rhodes Scholarship selection committee, which made her one of only eleven Rhodes scholars in Canada in 2003.

With eloquence and passion, this personable young woman is already making a difference. Obiri-Yeboah came to Canada from Ghana as a refugee at the age of two when her parents fled a military coup, a family experience that has undoubtedly shaped her desire to give voice to the marginalized. She has written regularly for Vancouver’s The Afro News, and volunteers as a mentor for children in the African-Canadian community.

Obiri-Yeboah was attracted to UBC partly because of its Arts One program, a unique, integrated first-year curriculum where professors from English, Philosophy and History help develop a broad analytical perspective. “I had some terrific teachers who inspired me and challenged me to set my sights high,” she says.

She also earned Political Science credits volunteering for HOPE International, a non-profit agency engaged in sustainable development in the world’s poorest communities. Last year she completed her degree in English and Political Science.

Now, with a special interest in African literature she hopes to explore at Oxford, Obiri-Yeboah is poised to reach a wider audience. “I want to shatter stereotypes placed upon African peoples. The voices of African individuals telling their own stories, defining their own identities, and speaking the truth must be heard.”