Dreams We Must Loathe 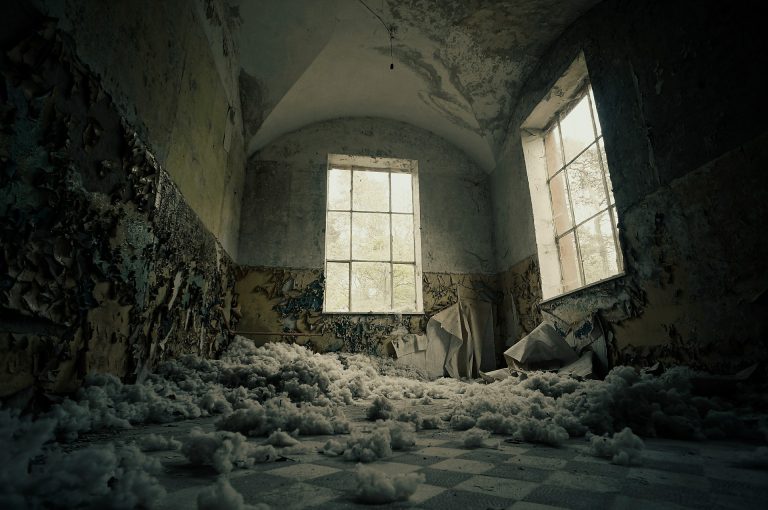 As the Man attempts to walk the narrow line separating blind optimism and consuming despair, he uses his dreams and memories to keep him situated on the difficult path of realistic survival. The combination of the will to survive and unavoidable despondency yields a certain type of recollection of memory. In The Road, Cormac McCarthy uses the Man’s philosophy on dreams to follow the state of mind of his own characters.

He mistrusted all of that. He said the right dreams for a man in peril were dreams of peril and all else was the call of languor and death. He slept little and he slept poorly. He dreamt of walking in a flowering wood where birds flew before them he and the child and the sky was aching blue but he was learning how to wake himself from just such siren worlds. Lying there in the dark with the uncanny taste of peach from some phantom orchard fading in his mouth. He thought if he lived long enough the world at last would all be lost. Like the dying world the newly blind inhabit, all of it slowly fading from memory. (18)

To begin, we must examine the Man’s belief in the significance of dreams. His view is that if one is in a dire situation, one must only dream of life of that gravity, and to reminisce about a happier time is to succumb to one’s doomed situation. The Man believes that dreaming about an optimistic future or remembering past joy is weak. In the Man’s situation in particular, dreaming about the past is the sign that he does not exist in the present, a dangerous result when he is the caretaker of his own survival, as well as his son’s. If the Man removes himself from his own reality, the motive for his persistence in getting to the coast would be lost. McCarthy aptly gives us evidence of this tenet at work immediately after the Man presents it. When the Man finds himself dreaming of “the sky . . . aching blue” and a “flowering wood” (18), he consciously stops himself. The use for frivolous fantasy is nonexistent in this post-apocalyptic world. The Man describes these fantasies as “siren” (18), seductive, teasing and fatal to the heart.

It would be easy to get sucked into this vacuum of wondering but daydreaming is not an option for the father. Instead of yielding to the appeal of delusion, the Man must stay present for the sake of his son. And with the heavy weight of reality, the Man’s thoughts turn dark and gloomy. His mind strays to the end of his existence, and the end of the world as he knows it. He forces himself to think about the grimness of his future. One might think that the acknowledgment of this bleakness would lead to an upheaval of his demonstrated fortitude considering his and his son’s journey, but the disappointment of a sharp reminder of one’s reality is much more of a blow to morale. McCarthy’s analogy of the blind man who slowly forgets the visible physicality of life is like the loss of the Man’s old life, “fading from memory” (18). For the better, the Man must forget his past and relearn how to live with new guidelines and rules. The Man is the first subscriber to his philosophy.

McCarthy engages the Man’s philosophy using another character too: the Man’s wife.

My heart was ripped out of me the night he was born so dont ask for sorrow now. There is none. (57)

One can only wonder if the Man’s adopted conception of dreaming is a consequence of his wife’s suicide. The Man recalls his and his wife’s last conversation before she decides to escape the torment of their circumstances. She tells him that she no longer dreams or feels sorrow. Instead of succumbing to the comfort of fantasy, his wife loses her ability to ruminate and consequently her ability to cope with her suffering. The use of the Man’s philosophy not only serves the purpose of avoiding the harsh reminder of reality but also allows him to be able to conceptualize his situation. The woman can no longer think about their situation and subsequently loses the will to survive and go on, a fundamental necessity of the post-apocalyptic experience. The Man’s ability to face their isolation allows him to stay grounded in his desperation. The weight of their unending journey on the road would be overwhelming without recognizing and compartmentalizing the ceaselessness. If one cannot afford to remove oneself from reality, it must at least be pushed to the dark corners of one’s mind for retrieval at a more convenient time. This is clear when we compare the will to continue of the Man to the woman.

Concerning the influence of dreams in relation to the contents of one’s mind, the Man survives far longer than the woman because he can accept the inevitable. He has the capacity to acknowledge their torment as unavoidable, which is the first step in accepting it. However we must be careful not to disregard the nuances of the Man’s psyche as he navigates the unprecedented struggles of living in this world. It is not as simple as choosing to be aware of one’s situation and achieving some desired acceptance, because the slimy ooze of doubt easily slips through one’s fingers. But one of the strongest enablers of the Man’s resolute decision to survive is his proclivity for staying grounded. The Man is aware that his son needs him.

He knelt there wheezing softly, his hands on his knees. I am going to die, he said. Tell me how I am to do that. (175)

It is not a matter of if he is going to die, that is obvious and inescapable, but how he could. We know that when the Man does die, the boy is taken care of, but in the mind of the Man, he is his son’s life force. His persistence for continuing on is because of the subsequent survival of his son, and his principle of conceding to reality is the only way to sustain the Man psychologically when faced with unavoidable hardship.

The boy was sitting on the steps when he saw something move at the rear of the house across the road. A face was looking at him. A boy, about his age, wrapped in an outsized wool coat with the sleeves turned back. He stood up. He ran across the road and up the drive. No one there . . .

Dropping the boy into McCarthy’s landscape is an insidious task. His choice to insert a child into this world adds a particularly sadistic element that is different than an adult’s survival. The psychological effect of life on this particular road is damaging for anyone, but it will be embedded into the boy’s childhood and formative years. He is confronted with widespread death, hunger, violence and his own mother’s suicide, forcing him to mature beyond his anatomical age. Despite this exposure to the scourges of life, the boy remains sensitive to the plight of others. He believes he sees a boy, like himself, and his instinct is to go towards him, but the boy disappears. Christopher T. White in his article “Embodied Reading and Narrative Empathy in Cormac McCarthy’s The Road“ states:

throughout the novel, the boy feels a spontaneous “shared affect between self and other,” which psychologists define as the “experiential core of empathy” (Pfeifer and Dapretto 184). While the father, reasonably, treats every encounter as a possible threat, the boy is able to imagine and feel, as if they were his own, the fear, suffering, and loneliness of others they encounter on the road. . . . (532)

Emotionally, the boy has a deeper sense of empathy and sensitivity than the Man. His absence of a stable, formative childhood is what leads me to believe that the boy he sees is a figment of imagination produced from a place of longing but also from a place of empathy for his own situation. The boy is seeing himself from the perspective of an outside viewer, perhaps the reader, and in this way, is faced with the reality of his own situation. Applying the Man’s philosophy to this event, the boy exhibits the same practicality and fortitude that the Man does. Still taking into consideration the differences of age and experience, the boy, despite his sensitivities indicative of youth, is grounded in their journey.

You’re not the one who has to worry about everything.

The boy said something but he couldnt understand him. What? he said.

He looked up, his wet and grimy face. Yes I am, he said.

The boy is not blind. His father’s moral discrepancies are just another grim aspect of the boy’s reality. “To worry” is the essence of the Man’s grave philosophy and the boy has adopted it.

In the evening the murky shape of another coastal city, the cluster of tall buildings vaguely askew. He thought the iron armatures had softened in the heat and then reset again to leave the buildings standing out of true. The melted window glass hung frozen down the walls like icing on a cake. They went on. In the night sometimes he’d wake in the black and freezing waste out of softly colored worlds of human love, the songs of birds, the sun. (272)

The collapse of his grit signals the deterioration of the Man. He begins to experience the “rich dreams” that he was once “loathe to wake from” (131). His mind is allowing the comfort of happiness to settle. The imagery of “icing on the cake” and “softly colored worlds of human love, the songs of birds, the sun” is foreign to the language of their journey. McCarthy uses this change in dreams as an indicator of the Man’s impending end. This is the last description of his dreams before he dies. His mind has failed his own philosophy and his body has failed his mind.

The Man is versed in the dealings of wretchedness and misery. “A man in peril” is a simple but accurate description of him. The recurring presence of dreams has come full circle to validate the notion. McCarthy uses a grim, steely style of writing because he must. Violence and death are paramount to the story and McCarthy’s characterization would be null and void if the effects of such savagery were not addressed. The Man’s adaptation of thinking to best suit his circumstance is a pillar of character throughout the novel. The way in which the Man, the son and the wife handle misery navigates their existence on the road. Ashley Kunsa discusses oppositional takes on Cormac McCarthy’s writing style: “In The Achievement of Cormac McCarthy, Vereen M. Bell lays out the view of McCarthy as nihilist, identifying in the author’s first six novels little by way of plot, theme or character self-consciousness and motivation. For Bell, these missing elements amount to ‘McCarthy’s metaphysic summarized: none, in effect — no first principles, no foundational truth’ (Achievement 9)”. I strongly disagree with Bell, as the Man exists based on two “foundational truth[s]”: his son will survive at any cost, and he must not ruminate on the past if he is going to survive. And the notion that McCarthy’s characters lack motivation is an insult to the character of the Man. His son is the only motivation he needs to continue on their journey. Interwoven with the gruesomeness of McCarthy’s world is the subtle complexity of his characters. Without us knowing, we watch the story transpire through the lens of the Man and his doom-laden way of thinking.