Anne Frank: The Young Girl and the Writer 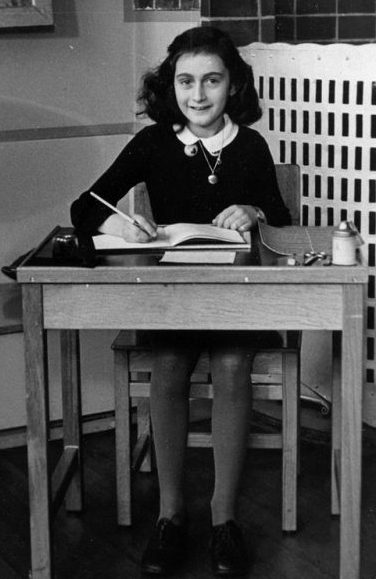 When Hitler began his long rise to power in 1919 and promoted anti-Semitism across Europe, the world was devastated by the horror that ensued. Amongst the approximately 60 million people killed during the war, 11 million of them were Jews. Anne Frank’s The Diary of a Young Girl is representative of the fear under Nazi regime and of enduring humanity in times of suffering. While Anne and her housemates are eventually forced into concentration camps following their discovery in 1944, the diary reflects her two years spent in hiding and the changes she underwent as a result. Beginning during a time of childhood innocence, the novel opens with a passage from Anne’s 13th birthday and closes with an entry of gloom and maturity. To many readers, the diary is expressive of Anne’s growth and illustrates her developing understanding of war and herself, as well as philosophical wisdom acquired under the strain of World War II. In Anne Frank: The Book, the Life, the Afterlife, Francine Prose quotes John Berryman’s description of Anne’s diary being “the conversion of a child into a person” (Prose 5), supporting popular opinion of Anne’s rapid development to adult-like wisdom in the memoir. However, instead of generalizing Anne’s self-awareness as a product of growing-up, her writing presents an image of division, as two versions of her character emerge throughout the novel. It is by reason of the small space the Annex provides and Anne’s own creative tendencies for self-reflection that her character separates between conflicting emotions and identities, that of optimism and realism; the young girl and the writer.

Written during a time of fear and hiding, the Annex as a physical space of limited horizons is essential to Anne’s growth as a writer and individual, as it is not only provides shelter and safety but a foundation for her self-discovery. Often feeling trapped within the walls of the Annex, Anne finds solace in her writing as a means of expression and a way to pass the time: “That’s why I’m so grateful to God for having given me this gift (of writing), which I can use to develop myself and to express all that’s inside me! When I write I can shake off all my cares. My sorrow disappears, my spirits are revived!” (Frank 245). Anne’s devotion to her diary enables her to maintain a sense of balance and control in the chaos of war while facing the constant threat of discovery. If the circumstances of her time at the Annex are far from positive, the cramped space nevertheless forces Anne into reflection and philosophical musing, stimulating her thoughts on identity and its conflicting forms. Had she not been trapped indoors with few alternatives to pass the time, she may have never paused to reflect on herself and the world around her. Anne’s dualities of character existed within her well before the war, and were heightened as a result of the Annex and the effects of confinement on her sense of self.

While Anne experiences many forms of growth during her time in hiding, it is her ever-changing moods and ambitions that play catalyst to her separating identities, as Anne herself attributes her contrasting emotions to internal dualities. At times Anne is so consumed with gloom she can barely contain herself, yet she can also be cheerful and optimistic, writing of the future and the good in humanity. While these feelings are not uncommon for people in similar situations, Anne is quick to dismiss this claim, writing, “as I’ve told you many times, I’m split in two…. They don’t call me a bundle of contradictions for nothing!” (Frank 329). Her emotional pendulum, swinging between extremes and through everything between, highlights Anne’s personal analysis and development. Her internal conflicts are further revealed as Anne describes the lighthearted and carefree self she presents to the world as a contradiction of the introspective young woman inside: “This (lighthearted) side of me is usually lying in wait to ambush the other one, which is much purer, deeper and finer. No one knows Anne’s better side, and that’s why most people can’t stand me” (Frank 330). Anne prefers her deeper and sensitive side to her expressive counterpart, but struggles to bring that hidden self to the surface as she is vulnerable to criticism and outside opinions. The only time Anne feels she can truly express herself is through her diary, as she is free to write her deepest thoughts without fear of judgment. The distinction Anne draws between light and dark emotions in the novel help to divide her character not only between an internal and external self, but between contrasting identities.

There are moments in The Diary of a Young Girl that may puzzle the reader, as Anne’s passages often vary so much in emotion, reflection and wisdom that the basis of character can become unclear. While she does explicitly draw a distinction between the light and dark sides of her, these contrasting moods help shape different identities found within the novel and present Anne as not just the young girl who inspired the title, but as the talented writer within its pages:

When I think back to my life in 1942, it all seems so unreal. The Anne Frank who enjoyed that heavenly existence was completely different from the one who has grown wise within these walls…. What has remained of that Anne Frank? Oh, I haven’t forgotten how to laugh or toss off a remark, I’m just as good, if not better, at raking people over the coals, and I can still flirt and be amusing, if I want to be (Frank 203–4).

Anne’s bubbly and carefree ways have not left her during her time at the Annex, and have instead become more refined and controlled as the writer within is revealed. Inspired by Gerrit Bolkestein’s call for wartime records, Anne begins writing with a new audience in mind, harnessing her deep and philosophical self to provide poignant musings, while utilizing her girlish side for comic relief. It is in harnessing dual identities, that of the young girl and the writer, that Anne’s diary becomes not only a document of war but an engaging autobiography, as her careful edits of past entries manage to improve and dramatize mundane passages while still preserving their original tone:

The differences between Anne’s initial efforts and her revisions vary from trivial to profound, and deepen our respect for her as a writer. The first versions are in many cases more impulsive and spirited, the second more distanced, cooler, even abstract. The revisions may trade immediacy for clarity, raw emotion for reflection, but they are nearly always better written – more condensed, descriptive, fully dramatized and evocative (Prose 135–6).

Prose describes Anne’s editing process during her final year at the Annex as calculating and thoughtful, fuelled by the writer within and her creative, internal self. Even Miep, who happened upon Anne working away at her desk, noticed a physical change in the girl putting pen to paper: “I saw a look on her face at this moment that I’d never seen before. It was a look of dark concentration…. She was suddenly another person there writing at that table” (Prose 7). Anne’s gaze surprises Miep, as it contrasts the young girl she is accustomed to and belongs instead to that of an introspective writer, highlighting the dual identities harboured within Anne and the diary itself.

Anne’s varying emotions and personalities, as discovered throughout the journal, are part of what transform The Diary of a Young Girl from a historical memoir into a literary classic. Anne’s heightened self-awareness, amplified by the Annex’s close quarters, allows Anne to harness her own shifting character and develop it within her writing. It is through her many identities and personal contradictions that she becomes a dynamic and realistic character, allowing for audiences around the world to relate to her struggle no matter their background. Anne was not only a remarkable young woman for her endurance and talent, but a universal figure for human growth, as she pondered the dualities found within herself during a time of chaos and confusion. Her complex character and eloquent expressions craft the diary into an interesting, attractive and engaging piece of writing that deserves recognition not only for content, but quality of work. Anne’s original title for the book, The Secret Annex, further emphasizes her role as a writer and her intentions to refine and enhance the original diary. Contrary to the naïvety suggested by the conventional title, Anne developed exceptional wisdom throughout her writing and accomplished incredible feats in spite of her age. “Until all of humanity, without exception, undergoes a metamorphosis, wars will continue to be waged, and everything that has been carefully built up… will be destroyed” (Frank 276). While the circumstances of Anne’s story are a distant memory, her words remain pertinent to this day and reveal not only the genius behind the well-crafted memoir but the many perspectives upon which it was built, proving the Diary of a Young Girl to be a literary classic penned by the timeless observer of her times, the author Anne Frank.