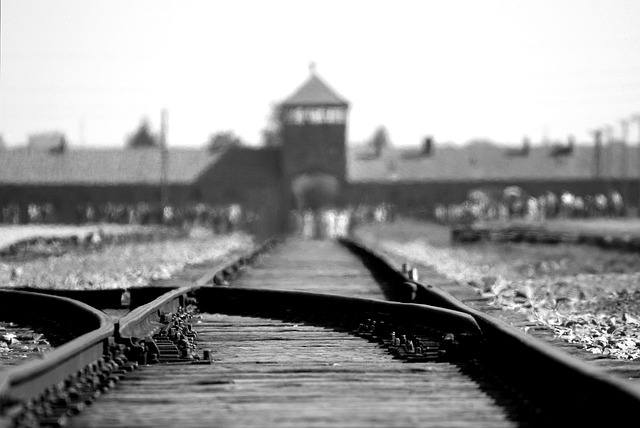 “Nach Auschwitz ein Gedicht zu schreiben, ist barbarisch,” wrote Theodor Adorno. “To write poetry after Auschwitz is barbarism.” Since writing it in his 1949 essay, “Cultural Criticism and Society,” this sentence has been quoted and appropriated time and time again by writers, thinkers, and critics — some indignant, some philosophical, and some in agreement. It is a striking statement that provokes an interesting discussion about the ethics of artistic portrayals of genocide at the very least. One such portrayal is W. G. Sebald’s Austerlitz. It would be difficult to say that at its core, Austerlitz is a Holocaust novel. It deals much with themes of memory, loss, being lost, pain, uncanniness, and architecture, and does so with a seldom use of paragraph breaks, the integration of images, and long, drawn out sentences — one of which lasts for eight pages. Although for the fact that I cannot communicate with the dead and that I do not know for sure whether Sebald wrote Austerlitz in response to Adorno’s bold claim, I will place the book in the context of Adorno’s quote for the purposes of this essay. With all due respect to Sebald, I will argue that in Austerlitz, he both seemingly complies with Adorno whilst contradicting his arguments, one, by imitating the pillaging of free expression experienced by Jews during the Holocaust, and two, by attempting to represent the unrepresentable.

To not take into consideration the context from which Adorno’s quote was drawn would be not only a disservice to Adorno himself, whose statement has been misquoted and misconstrued for decades, but also would only complicate the argument that I am making about Austerlitz. Theodor Adorno was a post-WWII thinker of Jewish heritage and left Germany during the Nazi regime (Zuidervaart). His quote about the barbarism of poetry after Auschwitz was drawn from the conclusion of his essay, in which he closes on his ideas about art and cultural criticism. He scathingly asserts that “[t]he more total society becomes, the greater the reification of the mind and the more paradoxical its effort to escape reification on its own. Even the most extreme consciousness of doom threatens to degenerate into idle chatter” (34). Without reading the whole essay, what he says may seem unjustified and unwarranted. What he seems to mean, as interpreted by Brian Oard, is that continuing to produce items of the barbaric culture that created Auschwitz “is to participate by denial in the perpetuation of that barbaric culture and to participate in the process (reification) that renders fundamental criticism of that culture literally unthinkable” (Oard). In other words, to make art means to deny that it was culture that gave rise to the Holocaust and to continue feeding the beast, so to speak. What Adorno seems to say then, with “To write poetry after Auschwitz is barbarism,” that because poetry is an expression of , it serves to contribute to its barbarism, therefore rendering itself a barbaric art. But it’s important, in analysis of this quote, to see that Adorno did not say that it is not possible to write poetry after Auschwitz, but that to do so means that it is at the risk of perpetuating a culture that is capable of mass extermination. He later somewhat corrects himself, saying that “it may have been wrong to say that after Auschwitz you could no longer write poems. But it is not wrong to raise the less cultural question whether after Auschwitz you can go on living” (Adorno qtd. in Oard). Arguably, though, this comment is no more optimistic than his first pronouncement. I will take into consideration this exploration of Adorno’s criticism in order to present an interpretation of Austerlitz that both imitates and challenges it.

In Elaine Martin’s essay “Re-reading Adorno: the ‘after-Auschwitz’ aporia”, she attempts to explain and contextualize Adorno’s claim for the barbarity of poetry, which will be useful in seeing how Sebald makes use of the very culture that Adorno condemns. “It was precisely the individual consciousness that was denied in the death camps and the imposition of agency in the process of representation would inevitably lead to a distortion,” she said (4). To be more specific, freedom of expression, as a right, was seized from Jews and Western Europe as a whole was heavily censored during the Holocaust, erasing individual thought and creativity and replacing it with a new, more sinister and controlled version of culture. Afterwards, freedom of expression was restored—art and poetry become privileged in the sense that they were once taken away, controlled, and abused by political force. Poetry becomes subject to the moral implications as a form of expression; language as the building blocks of literature attempts to recover from misuse. As it was so easily stolen and misappropriated, people become aware of the fragility of culture and its susceptibility to distortion, as Martin said. The intricacies of the German language had been appropriated in order to be “in the service of efficiency… withhold, deny, and silence” (Lieblang). Nazi documents euphemize and invent words in order to conceal the reality of the camps. For example, Badeanstalten literally translates to “bath houses” while it’s used to refer to gas chambers, Sonderbehandelt literally translates to “special treatment” when it actually means Jews taken through the killing process, etc. (Lieblang). Artistic mediums such as music and drawing had been used by the Nazis as propaganda to forward an appalling agenda. Culture overall, as Adorno claims, has blood on its hands for being responsible for the slaughter of millions—the very idea of art and culture has become entrenched in barbarity. Austerlitz, then, becomes Sebald’s experiment with affirming yet challenging that barbarity.

One can interpret Sebald’s writing style as being a way of imitating the exploitation of art and language during the Holocaust and in turn, satirizing Adorno’s quote. Sebald incorporates elements of the exploitation of art and language in order to imitate the barbarity of the Nazi regime. For example, his lack of quotation marks can symbolize the questionable ownership of words. There are times in the book when the reader loses track of the speaker, when Austerlitz’s speech becomes one with the narrator, but it is as if the credibility of the narrator is called into question because of the lack of quotation marks. Quotation marks denote that the following words belong to someone else and the lack of quotation marks in the book seems to indicate that the narrator is taking ownership of the words. The narrator is not quoting Austerlitz verbatim, but is instead retelling what Austerlitz had told him, which can mean it is subject to errors, embellishment, or even misinterpretation, so that Austerlitz’s story becomes as much the narrator’s as it is Austerlitz’s. Sebald also interweaves photos into the story and it is never made clear whether where they come from. By doing this, he takes images that may not be his and imposes his own meaning on them, characterizing the people in them. A photo on page 86-87, for example, depicts a group of men and women that the reader is supposed to take as being Gerald’s family—although the people in the picture can very well have a much different story. At the most basic level, Sebald, as a German, is writing about a Jewish experience that he arguably cannot write about morally and correctly. All of this is to say that in Austerlitz, Sebald portrays the barbarism that Adorno talks about by doing just what Adorno means by barbarism: distorting art and language to suit his own means. Certainly by doing this, Sebald’s purpose is not to exterminate millions upon millions of people, but on the contrary, he takes the art and the methodology that Adorno deems as barbaric and uses it to show that it can be used to attempt reconciliation with the past. The use of curious photos, for example, can be a way for Sebald to give stories to the commonplace people who are depicted in the photos, who may otherwise be lost to obscurity; at the same time, the photos are a way of giving visual representation to imaginary characters in order to provide them with any small amount of reality and solidity. Adorno, however, would disagree — it is impossible to use art to represent a past as horrific as the Holocaust.

Adorno’s dilemma is that only through culture could the horrors of Auschwitz be expressed, but he also finds culture to be an abhorrent, inadequate means of expression; Sebald attempts to navigate this tension through various plot devices and stylistic methods. According to Martins’ interpretation of various texts, Adorno asserts that he is not calling for the end of poetry, but that in fact “suffering demands the continued existence of the very art it forbids” (Adorno qtd in Martin 8). Art is at once obliged to represent the suffering of the Holocaust, but it also both insufficient and denied the capability of expressing it: “Representing the horror within an ordered and coherent formal structure runs the risk of attributing a sense of meaning to the senseless massacre” (Martin 9). Sebald then, by writing about it, runs the risk of degrading what happened because novels themselves have a structure that then tries to make sense of suffering which has no sense. So he writes about it by abandoning the traditional means of novel structure. He uses no paragraphs, no chapters, no clear sense of conflict that the protagonist must overcome, and no resolution. In the infamous eight-page long sentence, he retells the Theresienstadt ghetto experience (236-244)—in effect, he writes about the suffering in Theresienstadt without the constraints of a formal structure that Adorno fears will downplay the suffering. Adorno’s problem would be that by putting it into sentences, to begin with, is a way of formal structure. Perhaps, then, Sebald realizes the impossibility of the task. He uses the narrator to represent the distance that artists try but will never be able to close when making art about the Holocaust—the narrator takes on the added dimension of acting as the mediator between the reader and Austerlitz while at the same time not having full access to the truth or to the events experienced by Austerlitz. Even Austerlitz himself is distanced from what he recounts as he learns only of it through a friend of his mother’s, who also did not experience the horrors she tells Austerlitz about. In this way, the truth that Sebald tries to represent is so far that he instead accepts and acknowledges the fact that any noble attempt at “meaningful form leads to a falsification of events” (Martin 9), and in turn recognizes the inaccessibility of the sheer magnitude of suffering. The barbarity that Adorno refers to in his quote, then, is the space that art allows for misinterpretation and downgrading of the truth. In attempting to represent the unrepresentable in Austerlitz, Sebald adheres to the barbarity of poetry after Auschwitz, but he also exercises a degree of self-recognition of the barbarism.

“Nach Auschwitz ein Gedicht zu schreiben, ist barbarisch,” but Sebald did it anyway. He took the barbarity that Adorno feared—the exploited nature of art and culture, and the vulnerability of the medium to atrocity—and represented it in such a way that can be contradictory in its motivations and tries to represent the truth while realizing its limited access to it. By doing this he points to the ambiguity of ethics and the risk of making the bold statement that poetry is barbaric in light of Auschwitz. Poetry, after all, does not have to be pretty, and perhaps to not write poetry after Auschwitz would be more barbaric.