The Interchangeability of Gendered Traits 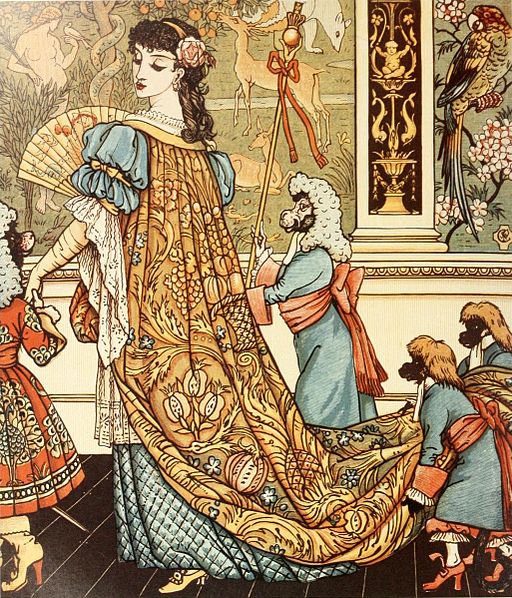 Beauty and the Beast illustration by Walter Crane (1875), public domain on Wikimedia Commons

The Interchangeability of Gendered Traits: An Exploration of Angela Carter’s Use of Gender Stereotypes in Relation to Female Sexuality and Desire in The Bloody Chamber

Angela Carter’s view on feminism differs from that of her contemporaries of the 1980’s. The disagreements regarding female sexuality during Carter’s time drew a divisive line between anti-porn feminists and sex-positive feminist groups. Carter’s peers would have disagreed with her switching her portrayals of masculine and feminine. The more traditional, anti-porn feminists would have had difficulty understanding how the fantasy of submission could not be a product of the patriarchal oppression they were fighting against. Carter did not believe women needed to conform to the feminine, she wanted to break down the binary oppositions. She does this by challenging traditional myths about the nature of women in her portrayal of male and female characters in her short stories. Through exploring the relationship between sex and violence, Angela Carter presents the stereotypical masculine and feminine traits as interchangeable in her writing. This theme is explored in the short stories “The Lady of the House of Love”, “The Company of Wolves”, and “The Courtship of Mr. Lyon”. By presenting different types of heterosexual relationships and roles, Carter legitimizes the desires of women and encourages them to pursue those desires, while deconstructing gender stereotypes.

In her short stories, Angela Carter challenges the stereotypical gender binary by presenting both male and female characters as having traits that are not typically assigned to their genders. In “The Lady of the House of Love”, the reader is presented with a more uncommon male/female relationship. There is a reversal of roles, where the woman is portrayed as the more powerful counterpart and the young officer is described as having “the special quality of virginity… ignorance, yet at the same time, power in potentia, and, furthermore, unknowingness” (97). The young man now embodies the feminine ideal of being virginal and innocent. Yet, he is described as having potential, foreshadowing the sexual awakening that is a common theme in Carter’s writing. In not denying that the young man has sexual potential, Carter does not wholly feminize the young soldier’s character.

This technique can also be seen in the Countess. Even though this female character is a vampire, and holds a sexual and violent power, she does not want it. She herself is “indifferent to her own weird authority, as if she were dreaming it. In her dream, she would like to be human” (95). She embodies the queen vampire role perfectly, “except [for] her horrible reluctance of the role” (95). This feminizes the Countess, as the reader would not be privy to her reluctance had the character been male. The sympathy she has for her victims is shown as she respectfully buries their remains in her garden after devouring them. This regard humanizes the character to a point where the reader is able to sympathize with the woman, not the vampire. Like the young soldier, neither character is wholly masculine nor feminine. As the Countess is readying herself to feed on the young soldier, she considers, “could love free me from the shadows? Can a bird sing only the song it knows, or can it learn a new song?” (103). Through the Countess’ reflection, Carter is communicating the ability we have as humans to constantly evolve, reiterating the theme of interchangeable gendered characteristics. The fluidity of our personalities is recognized by the Countess, as she hopes for a change in herself.

In “The Courtship of Mr. Lyon”, Carter depicts the male and female characters as in their stereotypical roles. Beauty is described as having “skin that possesses that same inner light … you would have thought she, too, was made of all snow … white and unmarked as a spilled bolt of bridal satin” (41). Her appearance is clearly pure and virginal, embodying the feminine ideal. In comparison to this great, masculine Beast, “she felt herself to be, Miss Lamb, spotless, sacrificial” (45). The depiction of such stereotypical male and feminine ideals provides a juxtaposition to the fewer fairytale relationships shown in Carter’s other short stories. Yet even though Beauty possesses these clearly feminine characteristics, “do not think that she had no will of her own … she would have gladly gone to the ends of the earth for her father, whom she loved dearly” (45-46). It is out of love for her father that she stays with the Beast, making Beauty an active agent of her own life. Carter wants to say that choosing to be submissive and obedient is not a product of the oppressive patriarchy, but a product of a woman’s choice. It is also Beauty’s choice to return to the Beast, and she does so to honour the promise she made to the individual she loves. Carter reaffirms the woman’s right to pursue a more classically feminine life, able to stand by one’s partner and give their whole for their partner’s happiness, just as Beauty gives up a life in London to stay with the Beast.

Carter’s short story “The Company of Wolves” depicts the heroine as a fearless young girl. Again, the reader is faced with a female character who does not wholly fit the typical feminine ideal, as the young girl is portrayed as not scared of anything, being confident in herself. These traits are still countered by the presence of her innocence, which serves to still feminize her character. As the young girl readies for her journey, “she stands and moves within the invisible pentacle of her own virginity. She is an unbroken egg; she is a sealed vessel … she has her knife and she is afraid of nothing” (113-114). In her virginity, the young girl is protected and afraid of nothing due to the innocence of her virginal state. Once again, Carter presents the male and female as not being as clear-cut as society wants to make these gender roles. It is our right to be able to possess both masculine and feminine traits, while embracing ourselves fully.

The young girl’s fearlessness and determination are shown throughout. When presented with the band of wolves, she simply says “it is very cold, poor things … no wonder they howl so” (117). Instead of being afraid, she pities them for their living conditions. The girl does not subscribe to the anti-werewolf tales that are told at the beginning of the story. Her innocence ultimately saves her and provides her with the courage to not be afraid. In the end, she is able to be with the werewolf because of this ignorance, a trait often associated with the female. Yet, Carter makes this the child’s saving grace. Even though she is portrayed as naive, the girl wears a cape of red, a colour of desire and blood, which symbolizes both her newfound womanhood and what will eventually be the loss of her virginity. This helps to contrast with her more obvious innocence. Once again, Carter presents us with a character that is neither straightforwardly masculine nor feminine.

In the young girl, Carter presents a female character who is in control of her own body and desires. When the werewolf announces that he is going to eat her, she laughs in his face because “she [knows] she [is] nobody’s meat” (118). Yet she still offers herself to the werewolf, ripping his shirt off as an invitation. By taking control of the situation, and acting on her sexual desires, there is a shift of power, where the young girl is able to give her body to him, and yet still keep ownership of her flesh. So while still maintaining the fantasy of being an object, Carter depicts women as being able to still keep that control over their bodies. By willfully giving themselves, women are active characters in their fantasies.

In her short stories, Angela Carter presents the reader with characters who do not fully embody the stereotypical masculine or feminine. By doing so, Carter says there is validity in women recognizing their sexual desires. Contrary to what many of her contemporaries would have said, this is seen as an act of feminism, as making the choice on the behalf of one’s desires, ensures that women play an active, not passive role in their lives. Carter affords women the right to fantasize about what they desire. This expands the realms of female sexual fantasies and explores the complexities of sexual desire for women. In her portrayal of different heterosexual relationships, Carter breaks down binary oppositions and validates the fantasies of women because it is their right to have them.