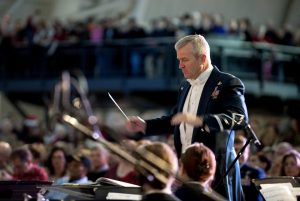 In Alan Moore and David Lloyd’s V for Vendetta, the eponymous V declares, following the word’s etymology, that “anarchy means ‘without leaders’” (195). However, just as the text’s evaluation of fascism does not necessarily coalesce with dictator Adam Susan’s evaluation, V’s evaluation of anarchy is distinctly his own. V knows that his rendition of anarchy is not devoid of authority; in fact, it relies upon V’s own authority to succeed, when defining authority as the power to influence others. In other words, since V does not imagine that an organic, popular, anarchic revolution will arrive without him, he acts as a conductor, conducting the instruments of even the regime he seeks to topple. Ultimately, V’s political ideology is a contradictory anarchy which requires the authority it seeks to discard, where anarchy is a mask and cloak which hides the various faces and weapons that changeably suit V’s aims: namely the faces of Susan, Fate, and Evey.

The first hidden face of V’s political ideology is that of Adam Susan. Susan is not only the leader of the Norsefire regime, but also – and more significantly – the leader of the Head, the office commanding a powerful authoritarian apparatus of surveillance, enforcement, investigation, and propaganda; metaphorically compartmentalized as “the Eye . . . the Ears . . . the Finger . . . the Nose . . . [and] the Mouth” (15–16). Indeed, this metaphorical naming complements Susan’s attempt to distill fascism into the symbol of “a bundle of bound twigs” and the slogan of “strength in unity” (37). However, the text repeatedly undermines the “unity” of this system, as in the scene following Susan’s debriefing, where Dascombe of the Mouth irritates and provokes Almond of the Finger until Almond, with a pained expression, calls Dascombe a “degenerate” (16–17). Moreover, as the text reveals the conflicting ambitions of Creedy (Almond’s replacement at the Finger), and of Helen Heyer (wife of Conrad Heyer, head of the Eye), who anticipates that “Creedy’s only waiting for [Susan] to crack completely before . . . staging a coup” (199), the imagery of Helen’s nude body, towering independently and indifferently above her husband’s powerless gaze in each frame, further contradicts the organizational metaphor that Susan supports. If fascism is tenable as “a bundle of bound twigs” (37), as Susan claims, he has either bound them too loosely or bound twigs covered in thorns.

In other words, Susan projects rational authority which belies madness; meanwhile, V projects madness which belies rational authority. Although Susan anoints himself as “leader of the lost, [and] ruler of the ruins” (37), while gazing up confidently at the statue of Justice, it is ironically V who more aptly fits this description. For V, “the lost” and “the ruins” are metaphors respectively for the “lost” people of England (whom Evey chiefly represents) and for the “ruins” of culture and free expression—he safeguards both in his “Shadow Gallery” (18). It is in this way that V recognizes the necessity of authority but does so covertly under the mask of anarchy. By contrast, Susan flaunts authority through threats and grand claims, but is underneath grossly illogical and unstable, immediately labelling V a “solitary lunatic” (15), and furthermore dismissing any criticism of fascism as “the bleatings of the weak and the treacherous” (37). Certainly, it is not surprising that Susan’s subjects detect in him emotional instability, not only Helen Heyer who asserts that “his mind’s disintegrating” (199), but more ominously Dascombe, who argues only after V’s first appearance that “the Leader is the most sensitive of us all” (17). Conversely, Evey seeks to understand and learn from V, whose rational authority she discerns first from his appropriated motto, “‘By the power of truth, I, while living, have conquered the universe’” (43). Evey correctly identifies V as such a conqueror, exercising authority with an apparent monopoly on the “power of truth”—in other words, the vast array of artwork, literature, and other cultural artefacts housed within his gallery, notwithstanding his complete infiltration and manipulation of the metaphorical body parts of Susan’s regime.

That is to say that, as V’s mask hides Susan’s face, V’s cloak of anarchy hides those body parts which are the weapons of Susan’s authority. With a complete grasp on Fate (the intelligent computer which advises all parts of the regime’s body) “since the beginning” (209), it is V and not Susan who is able to effectively direct the eyes, ears, nose, mouth, and fingers. Perhaps this is because V—unlike Susan’s regime—is in fact truly a single human being with a “unity of purpose . . . [and] a uniformity of thought” (37). In other words, hiding now the face of fate, V actualizes his predetermined will, in the process giving an illusion of choice to his subjects. Symbolically, V, while rescuing Evey from being raped and murdered by “fingermen,” kills one with an exploding prosthetic hand (13); while abducting Prothero (the voice of Fate), he kills one more fingerman, on this occasion by creating a “chest wound . . . with [his] fingers” (23). Certainly, the irony of V using his own fingers to destroy the “fingers” of this body of fascist authority indicates even further that V is embodying that which he is destroying. From directing the Mouth (and the Bishop) to read Fate’s scripts (16), to motivating Almond’s widow, Rose, to assassinate Susan, foreshadowed when V remarks coyly that for Susan he has “cultivated a most special rose” (221), V not only unambiguously rules the outcome of his anarchic revolution, but also manipulates the thoughts and actions of others with the unparalleled certainty of either a computer program or a god.

Through visuals and dialogue, V hides the face of fate—both capitalized and uncapitalized—predominantly within metaphors. The most consequential of these is the conceit and double-entendre of the conductor. In the first sense, V acts as an orchestra conductor, beginning by describing his fiery destruction of the Houses of Parliament as “the overture” (14). While anarchic in appearance by destroying a historical symbol of authority with a symbol V attributes to anarchy, “the flames of freedom” (41), this is ultimately a façade. There is no freedom for the musicians in V’s orchestra, neither for Evey, Rose, Finch, and even Susan, nor for the unnumbered people working for the Eye and the Ear whose lives V ends unremorsefully while waving a conductor’s wand (182–187). With V’s gestures in this scene dwarfing a model-size skyline behind him, his desaturated purple cloak furthermore stands out from the contrasting desaturated yellow flames. Thus, the coloured graphic novel format allows for even greater emphasis to show that V is not acting against the idea of rulership entirely, since he himself conducts the fate of England from his rooftop perch. In the second sense of the word, V acts as the conductor of a train with one track and one destination. The first appearance of this motif, during the scene of Prothero’s abduction from his train, suggests the authority-based manner through which V perceives he must conduct the arrival of England at anarchy’s metaphorical station. When Prothero exclaims that it “takes a military man to appreciate trains” (19), he establishes the train as a metaphor for Susan’s regime. By design, the train is compartmentalized, mechanical, and above all requiring, under threat of death, obedience to the train’s conductor. Once in motion, passengers are the ideal subjects of any ruler, as long as no passengers are able to learn how to conduct the train themselves—of course, V learns easily. However, the metaphor seems to find V forced to conduct without disembarking until his death, since without the train (which is both Prothero and V’s metaphorical mechanism of authority), neither he nor his passengers can travel to their destination—anarchy.

Thus, the final face which V hides is the face of his successor, Evey, who launches the train housing V’s corpse “with all [his] gelignite and lilies” in order to give him “a Viking funeral” (261). Extending the train metaphor, it follows that V is unquestionably aware that his methods of arriving at anarchy (i.e. his conducting of the train) prohibit him from arriving himself. Indeed, as the Viking is the lone occupant of his funeral vessel, in such a manner does the captain stay aboard his sinking ship—the passengers, in any case, must find a new method of transportation. To that end, when Evey proclaims, “The age of killers is no more. They have no place within our better world” (260), she does not exclude V from this group, nor does V exclude himself. Although Finch claims that he “must have killed [V] . . . [V] could have stopped [him]” (240), indicating that V effectively commits suicide with Finch’s assistance once Evey is ready to take V’s place. For V, because she will not kill, Evey redeems the purity of his political ideology: she and his symbol “become transfigured . . . forever” (172), finally expelling authority by expelling both the conductor and the train.

In essence, V’s political ideology is that anarchy as a mask must precede anarchy as a true face. With a true, yet hidden face of rational rulership from Susan’s insincere mask, and by manipulating Fate and the “body parts” of Susan’s regime, V sends his train racing towards anarchy, but with the stipulation that he must destroy the train before it arrives. As V explains to Evey shortly before allowing Finch to shoot him, “anarchy wears two faces, both creator and destroyer. Thus destroyers topple empires; make a canvas of clean rubble where creators can then build a better world . . . away with our explosives, then! Away with our destroyers” (222); indeed, V ends wearing the face of a destroyer while Evey begins anew, wearing the face of creator. However, V’s farewell to destroyers indicates his recognition that he has functioned in that role as an oxymoronic anarchist ruler. For V, only Evey’s face can continue, since he has decided to seal his own fate, Susan’s fate, Fate’s fate, and above all the fate of their shared, hurtling, explosive-packed train.