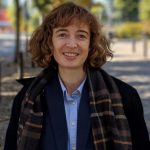 When I returned to UBC after ten years away, it was my ArtsOne memories more than anything that came flooding back to me. I am now a post-doctoral fellow in the department of Classical, Near Eastern, and Religious Studies, and just recently completed my doctorate at Oxford University’s Oriental Institute. My research has taken me to archaeological sites and museums across the Middle East and Europe, and I will be heading to Iraqi Kurdistan in May for excavation of a Late Assyrian settlement. I am an Assyriologist—an expert of cuneiform texts from ancient Mesopotamia. Assyriology is a discipline with a lot of ancient texts­­ available for study, many of which do not exist in published translation let alone extensive commentary. Scholars depend much less on secondary literature in this field than on studying the primary texts. I feel that ArtsOne gave me a valuable introduction to “thinking for myself” about ancient texts and gave me a head-start in graduate studies.

I am also a specialist in an undeciphered ancient script called Proto-Elamite. Dating to around 3000 BC and written on clay tablets found in Iran, Proto-Elamite is one of the oldest writing systems in the world. Interdisciplinary research has been important in my career, and my most recent paper, “Sign Clustering and Topic Extraction in Proto-Elamite” presents the first results of a collaboration with members of SFU’s School of Computing Science. In this paper, we have applied Natural Language Processing methods to analyse the texts and, we think, move forward our understanding this very early writing system, even if the language recorded remains (for the time being) unknown. Meanwhile, at UBC this term, I am teaching RELG-201 (Near Eastern and Biblical Mythology). Inspired by ArtsOne, I have incorporated into the reading list as many historical texts in translation as possible. We are having great classroom discussions about the Epic of Gilgamesh and other fascinating works of ancient Near Eastern literature. I love that my career involves digging into texts with colleagues and students—it’s almost like ArtsOne never ended!