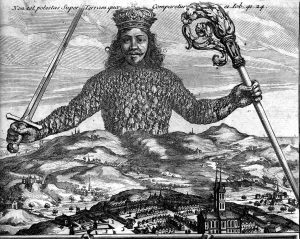 In Leviathan, Thomas Hobbes presents a world in which people make contracts with each other to create a sovereign, who has absolute authority over them and is responsible for their lives. This paper argues that although Hobbes advocates for authoritarian government, parts of his argument still tilt towards liberty. This paper then attempts to show that Hobbes’ creation of the sovereign is to keep people alive, and despite his complete authority over subjects, the Hobbesian state still presents a maximized individual liberty under the monarch’s rule, and Hobbes reveals his preference for liberty even in times of war.

Hobbes believes that pure liberty only turns people against each other, and he introduces the creation of sovereign to keep people alive. As long as “every man [has natural right] to everything,” Hobbes states, “there can be no security to any man,” because “competition” and self-interest are in the “nature of man,” and during their continuous competition for “honour and dignity, …envy, hatred, and…war” rise to the surface (Chap. xiv. [4], xiii. [7], xvii. [7]). With this unsentimental portrait of the negative sides of human nature, Hobbes suggests that competitiveness and self-interest in human nature can negatively impact the society, especially when pure liberty is exercised and people’s actions are driven by impulse. When all have absolute liberty, all is vulnerable. To stop men from competing with each other and to prevent “discord and civil war” that will tear the nation apart, Hobbes thus proposes the creation of a “common power to keep [men] in awe” (Chap. xviii. [9], xxi. [8]). Since a contract without enforcement for execution or hurtful consequences for violation is just a paper, a sovereign’s state can easily fall apart too if he has no real power. Hobbes therefore would like people to voluntarily transfer their civil rights to create the sovereign, who will then be “superior” and have “[un]limited” authority (Chap. xix. [12]). Still, however powerful the sovereign is, he is created to provide peace and defense for his subjects, as Hobbes mentions that the “obligation of subjects to the sovereign” ends when the sovereign’s protection towards them ends, showing that although the creation of sovereign takes away some liberty of its subjects, the goal is to make more subjects stay alive to enjoy their liberty at hand (Chap. xxi. [21]).

Hobbes introduces the sovereign and uses it to restrict the subjects’ liberty, but also balances everyone’s well-being with each one’s freedom, considerably maximizes people’s liberty under the monarch’s rule. To secure the position of the sovereign, Hobbes gives the monarch absolute authority over everything, and reiterates that people make covenant to each other, not to the sovereign; therefore, “none of [the sovereign’s] subjects… can be freed from [the sovereign’s] subjection” (Chap. xviii. [4]). Hobbes is not asking for complete subjection, for people do not covenant to hurt themselves, but besides that, people are to surrender all of their civil rights to the sovereign, and obey the latter in all times, which threatens the subjects’ liberty. Hobbes is not advocating for arbitrary and unjust rule, however, despite the fact that he gives the sovereign complete authority. Hobbes appoints the sovereign to be the “supreme judge of controversies…of all times,” but also states that if a subject has conflicts with his sovereign on the ground of “precedent law,” the subject has the “same liberty to sue for his right as if it were against a subject” (Chap. xx. [3], xxi. [19]). Such a statement seems unlikely and controversial within the context of authoritarian state, where the monarch should have the final say in all cases, but Hobbes chooses to limit the power of monarch for corporal liberty, an action presenting a tilt towards subjects’ freedom. Hobbes then reveals that he gives the ruler absolute authority to maximize the subjects’ liberty, an idea displayed with the provision of his line, “no king can be rich, nor glorious, nor secure, whose subjects are either poor, or contemptible, or too weak” (Chap. xix. [4]). Following his logic, the ruler only lives a happy life if his subjects are living happily, and the ruler only has liberty when his subjects have it, too. Hobbes believes that the ruler is more likely to grant his subjects more freedom when he himself is almost at absolute liberty, which he is in the Hobbesian state with unlimited authority. When the sovereign feels assured with his position, he then can afford the clemency to assure his subjects with the same security, by giving them liberty. Hobbes uses the authoritarian government to give people the most liberty that they can have, within the limit of not hurting themselves or others with it.

Hobbes also restricts people’s liberty with natural laws, as his persistence in placing preserving people’s life before preserving their liberty can sometimes push his argument too much towards liberty. Hobbes firmly believes that “all men equally are by nature free,” but to keep the majority alive and well to enjoy this freedom, he proposes the second natural law as “quod tibi fieri non vis, alteri ne ferceris [do not do to others what you do not want done to yourself]” (Chap. xxi. [10], xiv. [5]). Hobbes is ultimately suggesting that he acknowledges the equality and freedom of everyone, but since absolute liberty only results in everyone’s right to life being jeopardized, he proposes for everyone to surrender a part of their liberty to avoid placing their lives at risk. Parts of his argument, however, show that by advocating for preserving lives first, Hobbes is tilting the balance of his text too much towards granting subjects’ liberty. He states that when “a soldier [is asked] to fight against the enemy…his sovereign has right…to punish his refusal with death, [but this is] nevertheless in many cases refuse[d] without injustice,” and a deserter’s action of “avoid[ing] battle is not injustice, but cowardice” (Chap. xxi. [16]). With such argument, Hobbes almost undermines the sovereign’s power with his insisting in keeping people alive. One has to choose between liberty and efficiency in wartime, and some generals would order that if anyone dares to leave the battlefield, his comrades at the back are obliged to kill the deserter to ensure that the army has one uniting force and one uniting will of winning against their opponent, thus preserving the efficiency though greatly restricting liberty. Hobbes, however, does not think that deserters are wrong in avoiding wars, or that soldiers cannot disobey the sovereign when they are asked to participate in war, for it is in human nature to fear sudden and violent death, and “covenants not to defend [one’s] body are void,” thus presenting his arguments as in advocating liberty and valuing people’s lives over efficiency (Chap. xxi. [11]).

Thomas Hobbes is almost universally seen as an advocate for authoritarian government with his hypothetical world in Leviathan, where people surrender their civil rights to create a sovereign, and Hobbes uses the monarch to protect people’s lives and to prevent civil wars. This paper has attempted to argue that sometimes his argument tends to lean towards liberty. This paper also has attempted to show that while Hobbes creates the sovereign to preserve people’s lives, he also maximizes individual’s liberty under such rule, and reveals his favoring of liberty and valuing of human lives in parts of his argument.