American Madmen: Oppenheimer, Teller, and the Purpose of Science 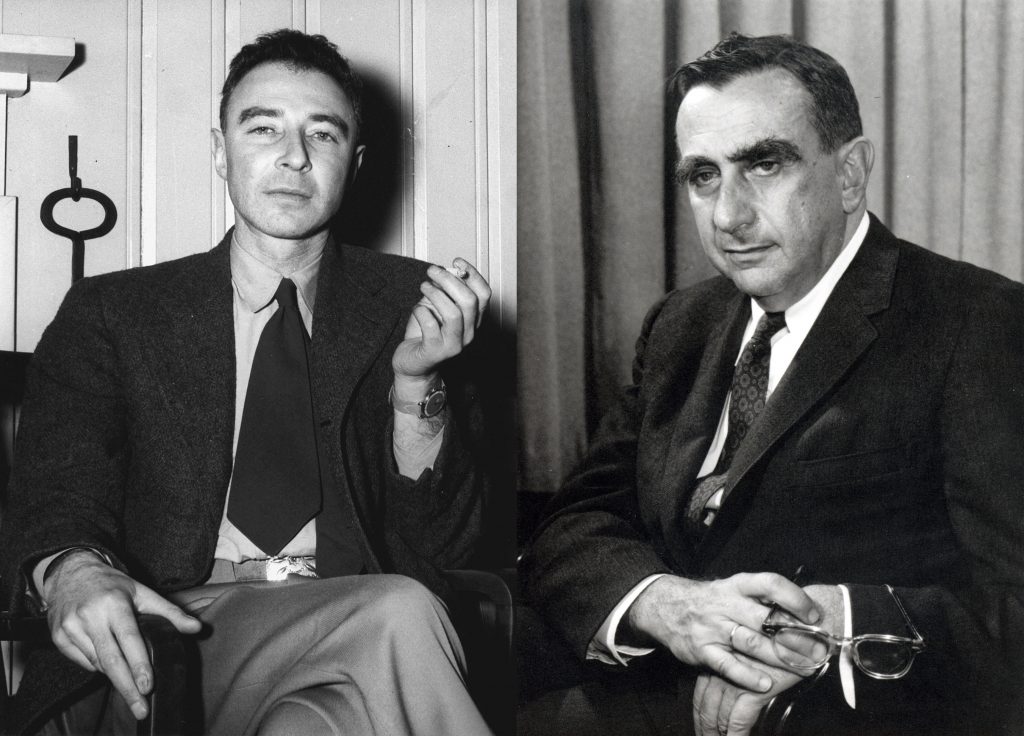 When considering where to lay blame for the hypothetical end of the world, it can be hard to decide whether responsibility lies with the creators of the means of destruction or those who actively put these means to use. This struggle is present throughout Heinar Kipphardt’s play, In the Matter of J. Robert Oppenheimer. Kipphardt’s characters argue different sides of this dilemma, but the play itself, while it may not explicitly condemn the physicists who decorate its stage, offers a critique of a science that has turned from its original purpose of discovery, research, and exploration, and dedicated itself to war projects. Oppenheimer is contrasted sharply against Teller, as the two brilliant physicists hold different perspectives on scientific responsibility, disarmament, and human nature. While Teller fails to feel any moral responsibility for his role in the creation of nuclear weapons, Oppenheimer is plagued by doubts and reservations. This distinction between their characters paints Oppenheimer in a relatively positive light and contributes to Teller’s characterization as a relentlessly rational and morally questionable ‘mad scientist’. Despite these differences, Oppenheimer and Teller both share an enthusiasm for scientific advancement that inhibits them from taking responsibility for the consequences of their discoveries. This shared trait is less noticeable than their stark differences in character, but emphasizes Kipphardt’s critique of science. Oppenheimer’s complicated character, simultaneously quite different and shockingly similar to Teller, allows Kipphardt to question the lengths to which science has strayed from its original purpose of discovery.

The characters of Oppenheimer and Teller contrast sharply against each other, especially in their perspectives on the role of physicists working with nuclear energy. Although Teller never feels any accountability for the bomb, he does admit to having felt hopeless when, in response to tensions with Russia, people were still considering disarmament as a possible solution instead of the development of the hydrogen bomb: “The government, the physicists, public opinion. It was enough to drive one to despair” (86). The dark irony of this situation—Teller, driven to despair by the thought of disarmament after feeling no remorse at developing a bomb that killed thousands of civilians—shines a kinder light on Oppenheimer who, at least, felt bad after the bomb was dropped. Oppenheimer describes the moral scruples that inflicted him as emerging “[w]hen it became clear to [him] that [they] would tend to use the weapon [they] were developing” (75). Although any moral hesitation on Oppenheimer’s part came later than would have been ideal—as the counsel for the Atomic Energy Commission points out, “To produce the thing, to pick the targets, to determine the height at which the explosion has the maximum effect—and then to be overcome by moral scruples at the consequences. Isn’t that a trifle schizophrenic?” (15)—Teller is never plagued by doubt at all. He has separated his role as a contributor to the creation of the atom bomb from any actual use the weapon may be put to. He maintains that it is impossible “to foresee quite well the range of practical uses for a hydrogen bomb” (93). The opposing ideologies of Oppenheimer and Teller in terms of their faith in the common sense of humankind marks another divide between the two physicists. Oppenheimer posits that an agreement will have to be made with Russia to end the hostility, that “[i]f the Devil himself were on the other side, one would have to reach an understanding with the Devil” (82), or else face the total destruction of earth. “I have great faith in the ultimate power of common sense” (82), he explains. Teller does not share this belief: “I am convinced that people will learn political common sense only when they are really and truly scared. Only when the bombs are so big that they can destroy everything there is” (92). His thinking is circular, pessimistic, and self-serving: build the bomb to produce the common sense required to not use the bomb. The questionable morals behind Teller’s unrelenting craving for scientific advancement has bestowed upon him a ‘mad scientist’ persona and an identity as “an incorrigible warmonger” (96).

Positioning the two physicists beside each other paints Oppenheimer in a generous light, as all that is foreboding about Teller’s enthusiastic pursuit of amoral science makes Oppenheimer appear more empathetic. In this way, Oppenheimer’s similarities to Teller are nearly obscured, and the qualities that might condemn him to share the title of ‘mad scientist’ with his fellow nuclear physicist are overshadowed. Although the play focuses on Oppenheimer’s reluctant behaviour after the dropping of the atomic bomb and his hesitation to develop the hydrogen bomb, he is nevertheless just as scientifically motivated as Teller. “How can you tell whether a new idea is really important?” Evans asks Oppenheimer, and the scientist’s response—“I know it from the profound awe I feel” (82) —could have come easily from the mouth of Teller, “a highly gifted man, full of brilliant ideas which he pursues with dogged fanaticism” (97). Teller’s passion is a defining aspect of his character, and it is mirrored in Oppenheimer, who, in addition, “has the ability to rouse others to enthusiasm” (84). The moral implications of this eagerness are explored by Evans, who queries: “is enthusiasm a good quality in a man who works on a weapons project?” (92). The weight of Teller’s reply— “[w]ithout enthusiasm, we wouldn’t have had the atom bomb in 1945, and neither would we have the hydrogen bomb” —can be felt in Evans’ unsure response: “Good. Or, rather, not good, maybe” (92). The same disconcerting fervor that renders Teller so unsettling in his approach to scientific exploration is also found in Oppenheimer, and although they express their passion in different ways, with Oppenheimer even becoming “[r]eserved and neutral” (89) after the bombing of Japan, their similarities serve as an alarming reminder of their joint willingness to forgo responsibility and ethics for the sake of science. Oppenheimer justifies his collaboration in the nuclear attack on Japan by maintaining that “[t]he dropping of the atom bomb on Hiroshima was a political decision—it wasn’t mine” (13); “[w]e weren’t asked whether it should be used, but only how it should be used in order to produce the maximum effect” (16). This deflection of responsibility is echoed in Teller, who never recognizes the issue of morality as a problem afflicting him. “It is not a matter of indifference to me,” Teller explains about his lack of guilt, “but I cannot possibly foresee the consequences, the full range of practical uses, which are part and parcel of an invention” (93). Teller and Oppenheimer have both dissociated the science of the atomic bomb from its consequences, allowing for a disconnect between their actions as scientists and the actions of the politicians and military who employ them. These commonalities, although less noticeable than their differences, illustrate Oppenheimer’s unrelenting dedication to science, a devotion just as ominous and disconcerting as that of Teller.

The implications of Oppenheimer’s positive representation in comparison to Teller, despite their underlying similarities, holds significant weight in Kipphardt’s overall message regarding the purpose of science. It is Oppenheimer’s unstable, continuously changing opinion on nuclear weapons that makes him an ideal mouthpiece for this critique. While Oppenheimer feels the same passion for science as Teller, he does not allow his scientific enthusiasm to impede his human compassion and its natural byproduct, horror. These scruples, of course, are birthed only after the dropping of the bomb. Oppenheimer losing his enthusiasm, manifested in his hesitancy towards the hydrogen bomb, is proof of him possessing the ability to acknowledge and respond to the consequences of his actions. Teller shares with the Counsel, however, that Oppenheimer’s reluctant attitude towards the hydrogen bomb program eventually changes, and that at a meeting with the General Advisory Committee, Oppenheimer revealed he “was actually delighted with [the] new theoretical discoveries, and he said he’d never have opposed the program if those wonderful ideas had come earlier” (90). No matter the reason for this sudden transformation, by supporting the hydrogen bomb despite his previous misgivings, Oppenheimer places his identity as a scientist above his identity as a member of the human race. This is the most condemning evidence against Oppenheimer in terms of his moral corruption. His betrayal of humanity, despite his firsthand understanding that these new creations mean “mankind as a whole can be annihilated by man” (78–79), is appalling. And yet in Oppenheimer’s final statement to the Personal Security Board it becomes clear he has once again changed his mind:

When I was being forced into that disagreeable recapitulation of my life, my motives, my inner conflicts, and even the absence of certain conflicts—my attitude began to change… I begin to wonder whether we were not perhaps traitors to the spirit of science when we handed over the results of our research to the military, without considering the consequences. (125–126)

The question then becomes: is this redemption? Does Oppenheimer’s new understanding of the inextricable connection between his role as a scientist and not only the creation of these weapons of mass destruction but also their use, atone for the fact that this new awareness comes too late? The answer is subjective and personal; it cannot be resolved definitively, and Kipphardt does not attempt to. The purpose of this morally questionable physicist, portrayed in such a fluctuating—albeit human—way, is to highlight the magnitude of this final realization. The unnerving mad scientist Teller, with his unwavering dedication to logic and reason, who seems so exceptionally different from the thoughtful and dignified Oppenheimer, is not as dissimilar as would first appear. Neither, however, is Oppenheimer static enough to warrant him being perceived as identical to Teller. The grey area that surrounds Oppenheimer lends itself to Kipphardt’s message regarding the purpose of science. Oppenheimer is a figure whose real life actions and complexity have allowed Kipphardt’s characterization to ask the intricate, convoluted question of “whether [they], the physicists, have not sometimes given too great, too indiscriminate loyalty to [their] governments, against [their] better judgement” (126–127).

The problem of responsibility when it comes to nuclear weapons and their massive destructive power is woven throughout Kipphardt’s play, and culminates not in a condemnation of the physicists who developed the atomic bomb, but in a critique of the breed of science that allowed itself to be wielded by politicians and the military. The different scientists who are portrayed in the play, Oppenheimer in particular, are integral parts of Kipphardt’s critique. The differences between Oppenheimer and Teller in their reactions to the dropping of the atom bomb appear to present Oppenheimer as the more ethical of the two, but Teller’s frightening enthusiasm for science is a quality found equally in Oppenheimer. The two physicists similarly share a willingness to forgo ethical responsibility in the name of scientific advancement and are able to draw distinct divisions between a creation and its uses. These shared qualities, nearly obscured by their differences, create within Oppenheimer a complicated war zone of moral understanding and obligations, and the infinite and exciting opportunities of science. The complicated personality and motivations of Oppenheimer are what make him the ideal centre for the play’s critique of science, as the physicist himself is just as perplexing as the question of scientific responsibility. Oppenheimer’s realization that he and his fellow scientists have been “doing the work of the Devil, and now [they] must return to [their] real tasks” (127) embodies Kipphardt’s critique: it is time for science to focus once more on its true purpose of discovery, not destruction.

Kipphardt, Heinar. In the Matter of J. Robert Oppenheimer. Translated by Ruth Speirs. Hill and Wang, 1997.