Destined Distance Between Melville, Tommo, and the Typee 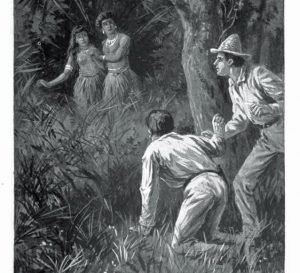 Typee: A Peep at Polynesian Life promises an account of Native life impartial to European bias: “the unvarnished truth” (Melville 2). Herman Melville, an American author, composes an exaggerated version of his own experience living amongst a group of islanders. His narrator, Tommo, joins the Typee community for four months before eventually escaping the island. While among them, Tommo draws upon European ideals, customs, and history to make sense of the Typee. These allusions romanticize the Natives, making them seem unattainable rather than equal to Europeans. Thus, Tommo’s character reveals an affinity for his homeland, despite making it appear inferior to the Typee Valley. He cannot seem to accept the lifestyle of the islanders, and his depictions highlight his feelings of alienation. The comparisons and references in this text display the incontrovertible distance between Tommo, his cultural background, and the Typee.

Melville, influenced by his religious upbringing and culture, repeatedly alludes to Christian symbols and beliefs when describing the Typee. The central adventure begins when Tommo and his companion, Toby, abandon their whaling ship and trek to the Typee Valley. Upon sight, Tommo depicts the beauty of the land: the “universal verdure,” “silent cascades,” and “rich herbage.” He likens the landscape to “the gardens of Paradise,” which he “could scarcely [be] more ravished with the sight [of]” (49). The capitalization of the word “Paradise” indicates that the narrator means the Garden of Eden, an idyllic land created by God. Tommo references it again when discussing the clothes that the Typee wear, the “garb of Eden” (87, 181), and while watching the Chief sail away from the “shores of Paradise” (173). With this consistent comparison of the Valley and Eden, the novel implies that the Typee are similar to the original human beings, Adam and Eve, who occupied the Garden. This association elevates the Typee to a standard of purity beyond that of an average person. Furthermore, in the story of Adam and Eve, the pair commit original sin, eating the fruit of knowledge, and are unable to return to their prior state of innocence. Tommo suggests the same distinction between the Typee and “civil man” (i.e., European people); civil humans can never return to the islanders’ way of life because of the corruption they have undergone. He brings forth this idea through his humorous depiction of “the fine gentlemen and dandies” removing their layers of clothes, dressing as the islanders do, and how “the effect would be truly deplorable” (181). However, there are also instances where he proclaims this contrast with more sincerity, writing, “better will it be for them [Indigenous peoples] . . . to remain happy and innocent heathens” than to be made “victims of the worst vices and evils of civilized life” (181–82). The religious aspects that Melville includes ennoble the Typee beyond accessibility. As one of these civil men, the novel implies that Tommo can never be happy in the islanders’ society because he is far from their state of purity.

Melville uses impressive European figures and myths to accomplish the same goal of promoting the Typee to a higher state of being. During the first interaction between the two adventurers and the Typee, Tommo is introduced to a doctor that he describes as the “old Hippocrates himself” (79). Hippocrates, a Greek physician, is well-known for his work in the medical field, and this comparison makes the Native doctor seem more remarkable. This section of Typee is also titled, “A Native Aesculapius” by Melville, which refers to another Greek idol, the god of medicine. By using these two renowned Greek figures, the author not only romanticizes the Typee, and their abilities, but shows a visible detachment from the islanders. He is unable to capture their essence without using familiar European images that they surely would not understand. For example, he cannot express the role of Kolory, a warrior priest, without likening him to “a sort of Knight Templar,” a Christian soldier (174). This occurs again when he compares Typee and European women, writing, “it would be the Venus de Medici placed beside a milliner’s doll” (161). None of these comparisons are meaningful to the Typee; they are so Eurocentric that the islanders likely do not comprehend their importance. Yet, they are impressive and glorifying images: a doctor like a god and women as beautiful as Aphrodite. These cultural references coupled with the religious undertones that Melville employs throughout display a distinct distancing of Tommo and the Typee. The Typee are elevated beyond civil man with European myth, art, and beliefs.

These comparisons are not limited to the Typee Valley or the Natives’ appearances but reach into their culture as well. From the beginning, Tommo seems to admire the lifestyle of the Typee, bringing forth the Valley’s innocent happiness in a style reminiscent of Rousseau. As he claims, the Typee lead “an infinitely happier, though certainly less intellectual existence, than the self-complacent European” (124). Again, Melville uses ironic humour to show the difference, making a correlation between “the head-quarters of the valley” and the stock market exchange. Tommo writes that with all the men gathered together conversing, one may think it “a kind of savage Exchange, where the rise and fall of Polynesian Stock [is] discussed” (157). This likeness is humorous when put in juxtaposition with his earlier statement that the Typee have “no Money! That ‘root of all evil’ was not found in the valley” (126). Through this example, it is shown that valuable aspects of European society have no place in the Typee Valley. Yet, Tommo still compares their affairs, which shows his affinity for European activities even when no longer involved in that civilization. In a similar fashion, the cultural structures of the Valley are portrayed with a European understanding. In a later chapter, Tommo comes across a rock formation that is of particular importance to the Typee. Tommo writes that it reminds him “of Stonehenge and the architectural labors of the Druid” (154–55). He gazes upon the formation and says that it produces more awe than the Pyramid of Cheops, another structure with a mysterious origin. These two landmarks are among the Wonders of the World, and this reference to them is high praise for the Typee’s sacred landform. However, there is a rift between the religious beliefs of Tommo and the Typee when it comes to the creation of the structure. Kory-Kory, a Native guide to Tommo, explains that the islanders assume that the gods built this phenomenon at the beginning of the world. However, Tommo, with his European perspective, thinks that the Typee are too naïve to recognize that it was likely the work of human beings. His skepticism of the Typee’s religion and views shows that he is not fully integrated into their way of life. Although Tommo commends the Typee and their culture, he is also removed from it by his own accord.

Melville continues to utilize European history to formulate and contrast his opinion of the Typee. He writes about voyagers such as “Carteret, Byron, Kotzebue, and Vancouver” (177), but the most frequent references are to Captain Cook. “The unhappy fate of Cook” (234) is a lurking threat to Tommo and Toby, as they both have suspicions that the Typee are cannibals. This fear is highlighted during one of the feasts when Toby cries out, “A baked baby, by the soul of Captain Cook!” at the sight of a prepared pig (95). Near the end of the book, Tommo suggests that the cannibalism of Cook was a ploy by the Hawaiians to gain notoriety. He states any accounts of cannibalism should be put “on the same shelf with Blue Beard and Jack the Giant Killer,” two fictional European stories (205). This distrust for the legitimacy of Cook’s fate

demonstrates Tommo’s growing attachment to the Typee. Of course, he refers to the charge again after seeing the three heads that the Typee possess, writing, “the Polynesians are aware of the detestation in which Europeans hold this custom” (234). In this statement, he contrasts the two nations, “the Polynesians” versus “the Europeans,” which provokes the question: which group does Tommo belong to? By using the word “detestation,” it appears that Tommo is trying to separate himself from the Typee, favouring the Europeans who disapprove of cannibalism. Captain Cook, and the regular references to him throughout the text, display Tommo’s fondness for European ideas, even when he strives to disprove them.

This reliance on metaphors and allusions to European standards conveys the depth of Tommo’s character. Despite praising the Typee, their culture, lifestyle, appearance, and lands, Tommo casts himself as an outsider. He makes comparisons to qualities of his homeland and, by doing so, displays a deep connection with his European values and heritage. It appears that as much as he tries to familiarize the Valley, he never truly feels content there. Thus, he creates an image of the Typee that is unattainable, mirroring his inner sense of estrangement. The Valley is Eden, the people are gods and goddesses, the structures are antiquities, and Tommo—as well as Melville—can only ever be a corrupt civilized man.