Material Conditions: A Comparative Analysis of Idealism and Materialism 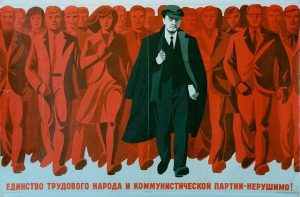 The Communist Manifesto, by Karl Marx and Friedrich Engels claims that the material conditions of society are the foundation of our intellectual development. Their theory of dialectical materialism states that the notions we have about society are formed by our underlying social conditions. While their presented theory advocates for a revolution in the material conditions of society and the abolition of private property, many thinkers before Marx and Engels dealt with our relation to material conditions in society. In one of his most notable works, The Republic, Plato explores the significance of private property and its relation to idealism. As one of his most central and influential ideas, Plato contends that the essential nature of the world is based on abstract ideas, as opposed to material conditions. As Plato supports idealism as opposed to materialism, his perspective on the nature of the world directly opposes that of Marx and Engels. Contrary to The Communist Manifesto, The Republic contends that the fundamental abstract concepts of society, such as class, are the cause of our material conditions. As such, Plato’s theories on idealism demonstrate the necessity of private property. In the seventh book of The Republic, Plato demonstrates his perspective of idealism through the Allegory of the Cave. The Republic also demonstrates a utopian society in which the relation humans have to private property is a foundational aspect of this society. Although significant, the material conditions of Plato’s proposed society are founded from an idealist perspective and are therefore an effect of abstract notions as opposed to their cause. Contrarily, Marx contends that the material conditions of society are not only significant, but are the foundation of the development of society, and in turn abstract notions, such as class structure. While the development of materialism and idealism in their respective texts present a duality in thought and perspective, a comparative analysis of both philosophies expands our understanding of materialism and idealism as they pertain to societal and intellectual development.

From the beginning of The Communist Manifesto, Marx and Engels demonstrate the essentiality of material conditions as it pertains to intellectual development and the development of society. Yet, Marx claims that “the history of all hitherto existing society is the history of class struggles” (1), and as such, this raises the question of what importance does historical materialism hold? On the one hand, Marx and Engels contend that it is the material conditions of society that define its evolution, yet they claim that the struggle between classes is what ultimately defines the evolution of history. While these two ideas may appear contradictory upon initial reading, an in-depth analysis of historical materialist philosophy as a whole demonstrates how these two ideas are not only compatible, but necessitate each other. Although materialism contends that the intellectual development and evolution of society is defined by our material conditions, rather than having mutual exclusivity with class struggle, it is ultimately the root of class struggle altogether. Oftentimes, misconceptions about the relation between materialism and class struggle results from a misinterpretation of Marx and Engels’ writings. In his article, “The Consistency of Historical Materialism”, Richard Miller addresses the misconceptions surrounding historical materialism and how they can ultimately be resolved, in turn further demonstrating the significance of materialism as it pertains to class struggle. Miller responds to another article written by Stanley Moore, in which Moore contends that “major aspects of Marx’s theory of social development are mutually incompatible” (Miller 235). Although a common misconception about Marxist theory, Miller responds to Moore’s article by demonstrating the manner in which these misconceptions arise out of a misinterpretation of The Communist Manifesto. Miller approaches these misconceptions by contending that these aspects of Marx and Engels’ writings should not be taken in a literal manner, but as representative of their ideology as a whole. Richard Miller uses an analogy of a geologist, “to take a simple example, a geologist might say, ‘the history of the earth’s surface is the history of continental drift.’ If he means to explain ‘the general idea guiding his studies’ in plate-tectonics, we would accept his statement as a legitimate simplification of reality” (237). Although “the earth was once entirely covered with water” (237), the geologist in this analogy claims that earth’s history is defined by continental drift as a simplification of a more complex idea, yet we nonetheless can infer the meaning of this without assuming it to be literal.

Plato’s idealism and perspective on the role that private property plays in society demonstrates a clear contrast to the materialist theory presented by Marx and Engels. While Plato recognizes the significance that private property holds in society, his idealistic perspective differentiates material conditions as influenced by ideas as opposed to being influential in intellectual development. In other words, Platonic idealism contends that material conditions arise as a result of pre-existing abstract notions, whereas materialism contends that material conditions are the root of the abstract notions of society. In the seventh book of The Republic, Plato presents the Allegory of the Cave. In this allegory, Plato states that there are “men in an underground cave-dwelling . . . their legs and necks in chains, so that they stay where they are and look only in front of them . . . higher up, a fire is burning behind them, and between the fire and the prisoners is a road” (514). Having been shackled in this cave their whole lives, their only perception of reality is the shadows cast on the wall of the cave in front of them, caused by the fire projecting images of what passes along the road of the outside world. Upon breaking free, one of the individuals leaves the cave and sees that his former perception of the world was nothing like its true form. Although an allegory, Plato contends that “[these people] are like ourselves” (515), in that our perception of reality is but a reflection of its true form. Plato uses this allegory to present his idealistic theory of the forms, which states that the basis of our reality is, in actuality, a reflection of true and perfect forms, or abstract ideas. Every material item, such as trees, rocks and animals, are reflections of the perfect forms of each. Similarly, individuals’ perceptions of abstract ideas, such as love and beauty, are also reflections of the true forms of these ideas. As such, the abstract notions of society, such as class structure, love and desire, are ultimately fundamental and inherent notions that define society and its structures, and are therefore independent of the material conditions of society. In understanding the basis of Platonic idealism, it becomes apparent how it contrasts to materialism. As the essence of society is based on abstract ideas, it follows that material conditions are only instrumental in the application of these ideas. The underlying concept of this philosophy demonstrates the relation that Platonic idealism holds to private property and its necessity within society, in that the material conditions of society are the direct result of the natural and essential characteristics of each individual and society as a whole.

Plato applies his idealistic perspective to the significance of private property when formulating a utopian society. He believes that each individual is born with certain natural distinctions, and as such, the class structure of the kallipolis is based upon the essential characteristics of their souls. Plato uses a metaphor, known as the “noble lie” (414), to demonstrate the differences between the natural characteristics of different groups of individuals. He contends that the soul of each individual is made of either gold, silver or copper. The first class of people, the guardians with souls that are made of “gold” (415), are the leaders of society, as they are driven by their wisdom and “are capable of ruling” (415). The second class, the auxiliaries with souls of “silver” (415), are responsible for the protection of the city, as they are driven by their bravery and “courage” (416). Finally, the third class of people are the rest of society who have souls of “iron and copper” (415). This class of society is made up by the average citizens who work as tradespeople, farmers and so on, and are naturally defined by their passions and desires. The guardians and auxiliaries, with “divine metals always in their hearts” (416), should own no form of private property whatsoever, as they “have no need of men’s silver and gold; nay, [it] is an act of impiety to pollute their possession of the divine gold by conjoining it with the mortal” (416). Plato furthers this by declaring that the auxiliaries and guardians should “live in common, taking their meals at public tables” (417). Plato contends that should the auxiliaries or guardians “acquire land or houses or money of their own, and are men of business and farmers instead of guardians, they will become hated masters” (417). As such, Plato argues that the possession of private property by the middle and upper class would lead to corrupt individuals of these classes. Contrarily, although Plato contends that “no one shall have any private property, unless it is absolutely necessary” (416), the individuals with copper souls are driven by their desires, and private property therefore becomes a necessity to these individuals. The means to achieve food, drink and whatever else necessary to satiate their fundamental desires and appetites is deemed by Plato to be justified, as these desires are an essential aspect of their nature. The discrepancy in the relationship that silver and gold souls have with private property compared to those with copper souls demonstrates the foundational significance that one’s pre-existing nature holds in relation to their material conditions. Contrary to Marxist thought, Plato’s idealistic perspective demonstrates the manner in which material conditions obey the abstract ideas that form the essence of society.

In contrast with Marxist philosophy, Platonic idealism serves to further our understanding of both idealist and materialist thought. Marx and Engels contend that the material conditions of society are what influence our desires and intellectual development, and as such, in changing these conditions, our desires and ideological perspectives will adjust accordingly. Contrarily, Platonic idealism contends that the material conditions of society must comply with the essential natures of our souls, and the resulting abstract notions. In juxtaposing these two ideas, we can form a more clear picture of the relationship that materialism and idealism have with private property and class. The materialist perspective presented by Marx and Engels contends that private property perpetuates an unnatural class distinction that can only be changed through the abolishment of private property, thus evolving our material conditions. This contrasts with Plato’s idealism, which contends that private property is used to satisfy the natural desires of certain classes of society, with material conditions therefore being altered in accordance with these natural desires and distinctions. Through a comparative analysis of both philosophies, individuals and society as a collective can better understand the significant role that material conditions play, whether instrumental in our development or essential to it.

Arruzza, Cinzia. “The Private and the Common in Plato’s ‘Republic’.” History of Political