All Gateway Students + Profs are invited to enjoy a movie together!

“The Man in the High Castle (1962) is an alternate history novel by American writer Philip K. Dick. Set in 1962, fifteen years after an alternative ending to World War II, the novel concerns intrigues between the victorious Axis Powers—primarily, Imperial Japan and Nazi Germany—as they rule over the former United States, as well as daily life under the resulting totalitarian rule. The Man in the High Castle won the Hugo Award for Best Novel in 1963. Beginning in 2015, the book was adapted as a multi-season TV series, with Dick’s daughter, Isa Dick Hackett, serving as one of the show’s producers.” 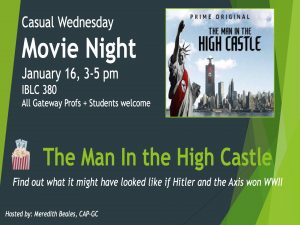