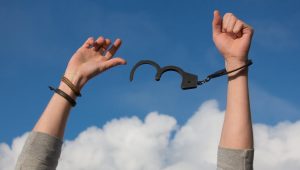 After many years of being asked, “If you were on an island and could only bring one thing, what would you bring?” one may be frustrated after reading The Tempest for never having said magic powers. With magic powers, one can do practically anything: conjure food, build a raft, or enslave an island’s native inhabitants. Prospero, an aristocrat who appears to rule over the island through decisive rhetoric and sorcery, seems to place specific emphasis on that last part, involving Caliban, described as “A freckled whelp, hag-born—not honoured with a human shape” (Shakespeare 116). One of these characters is a master of the island and of story, while the other is a “savage and deformed slave.” In this essay, I will endeavour to answer one simple question: Which one is which?

The Slave is Caliban

Prospero is not only the central figure in the play, he is also the assumed authority of The Tempest, as he sets up all of the action, or at least knows all of it and exerts his influence over the events in some way. In his very first scene, Prospero demonstrates authority over Miranda, Ariel, and Caliban, and the audience’s introduction to these characters is greatly in the context of Prospero. For the purposes of this essay, we will focus on Prospero as an assertive master to Caliban in particular, whom he orders to “make [their] fire, [and] fetch in [their] wood” amongst other gruelling physical tasks (118). The audience naturally assumes that the play is thoroughly under Prospero’s control, demonstrated not only by the aforementioned authority, though also in the beginning of the text with a storm wielded by his magical mastery. However, Prospero undeniably suffers from inner conflict, which is represented in The Tempest by Caliban (23).

Although we presume Caliban to be a slave, the definition surely extends to Prospero as well. He is constrained by a number of obstacles, the first being the island. He is physically confined to the area, though it extends even beyond that. If we consider the island to be akin to a pre-political context, then the island appears to be Shakespeare’s state of nature (Crawford). Under those circumstances, this is a liminal space where Prospero can establish virtually any reality. The island is also described by Gonzalo: “Here is everything advantageous to life,” meaning the island is ripe with potential, and “[the party’s] garments seem now as fresh as when [they] were at . . . the marriage of [Alonso’s] daughter, who is now queen” (The Tempest 132). They are figuratively refreshed, unburdened by the current political climate. Even with this opportunity to start anew, however, Prospero views the island as a prison and the place of exile from his dukedom. He tries to maintain his authority even though it no longer applies to his circumstances, and does not improve his lifestyle, summarized nicely when Caliban states “I am all the subjects that you have” (120). Thus, Prospero is not only a slave to the same authority he wishes to uphold, he is also enslaved to the past.

It is demonstrated in multiple situations that Prospero is not living in the present and is wedded to bygone events, constantly asking other characters, “Canst thou remember a time before we came unto this cell?” or “Dost thou forget from what a torment I did free thee?” (103, 114). He cannot let past events go, spending over a decade planning revenge on his brother. His emotional burdens are so severe that whenever he attempts to tell Miranda about the past, in which “By foul play . . . were [they] heaved thence [from Milan],” he stops, it being too difficult for Prospero to do so (105, 103). Even at the end of the play, when Prospero says “I do forgive thee,” he still introduces himself to the King as “the wronged duke of Milan, Prospero,” and returns to the state that has caused him grief (192–193). Thus, is Prospero ever truly freed from this encumbrance? When he says that he is “vexed,” has “weakness,” and “[his] old brain is troubled,” or when he directly states “release me from my bands” (181, 204–205), how is the audience to presume Prospero is anything other than a “deformed slave” to authority?

The Slave is Caliban Prospero

If Prospero can no longer be considered the main authority of the play, the audience must then consider the significant counterclaim to Prosper’s leadership (24). Caliban calls into question the very source of Prospero’s power on the island. The most prevalent of these passages is when Caliban states, “This island’s mine by Sycorax my mother, Which thou tak’st from me” (119). Caliban is “First [his] own king,” and his accusations against Prospero of usurpation and enslavement reveal an unexpected solidity; Prospero does not undertake to refute Caliban’s charges, and precisely for that reason the question of authority—on the island, or in any state—remains open (120, 36). It is important to observe that this is an instance—perhaps the crucial instance—where what Prospero says and what we perceive does not coincide; Caliban represents a striking failure of Prospero’s art (23). Caliban recognizes the power he has over Prospero, knowing that it was only when “then [he] loved [Prospero], and showed thee all the qualities o’th’isle” that Prospero gained his assumed authority over him (120). Caliban knows that he has authority as the island’s natural inhabitant. Beyond this, Caliban also knows that Prospero’s power comes from his books, and when Stephano and Trinculo plot to kill Prospero, Caliban knows to order them to “first seize his books” (160).

However, Caliban’s knowledge is not the only advantage he has over Prospero. Caliban also poses the largest threat to Prospero’s main subject, Miranda. When Miranda says “’Tis a villain, sir,” Prospero agrees, stating, “as ’tis, we cannot miss him” (118). Even though Prospero realizes that Caliban is a threat to his daughter, he sees Caliban’s absence to be an even greater risk: by having the ability to harm her, Caliban can thus harm Prospero. In this way, power and authority are very closely related in this play. Caliban has power over Miranda and Prospero through his instinctual knowledge of the island and, furthermore, his necessity to his alien leaders; through this, he is granted a kind of authority, through the same unconventional and assumed matter that Prospero is given the title of master. Moreover, Caliban is also a leader in the play, such as when he is pleaded with by Stephano, “I prithee now lead the way,” as well as when he orders Stephano to “Give [Trinculo] blows,” and “([Stephano] beats Trinculo)” (159). In these situations, the group grants Caliban’s authority over the party, with a verbal concession that Prospero never receives. Caliban is not subject to the rules outside the island, and thus, cannot be emotionally enslaved to them like Prospero. An example of this is when Stephano and Trinculo are tempted by the garments, though Caliban is not. These garments can represent the pomp and circumstance of life back in Milan, the temptations that power-hungry nobles fall privy to, though it is an interesting character choice for Caliban to be completely uninterested, stating, “I will have none on’t. We shall lose our time, and all be turned to barnacle or to apes” (186). Thus, it appears that Caliban knows his own truth and way of authority, and is more complex than his portrayal, which is largely orchestrated by Prospero, allows. Caliban merely wants his island back and is not afraid of its temporary squatters. When Caliban famously states, “Be not afeard, the isle is full of noises,” an interpretation can be that, however much Prospero jabbers about his authority and curses, Caliban has nothing to fear, for he knows that Prospero’s words are nothing but noise on his island (162).

Caliban is a master of the island and story, while Prospero is “a savage and deformed slave” to authority (96). While Prospero works tirelessly to maintain the authority he once had as Duke of Milan, by the fifth act he is tired, his “strength . . . most faint,” and in no way fit to be a ruler (204). At the end of the play, he returns to his dukedom and is enslaved by authority once more. Caliban, on the other hand, has an uncertain ending. That being said, one can assume that he is left on the island, for it is unlikely that Prospero would want Caliban to remain in his servitude when he resumes his position in court; additionally, it is difficult to remove someone from their natural habitat, especially if they have such native entitlement as Caliban. Thus, he is freed and can resume his own authority. Although Prospero returns to a state that has traumatized him and is subjected to many societal norms and rules that he has little power over, Caliban’s authority is completely of his own devising. At the end of The Tempest, Caliban is delivered unto his kingdom.