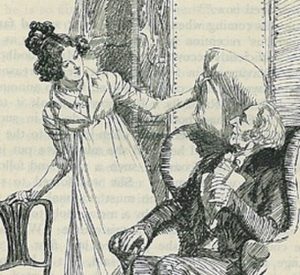 Satirically critiquing her characters’ behaviours and the English society in which they—and she—live, Jane Austen sketches a vivid portrait of her characters, their flaws, and the confines under which they operate in Emma. Austen’s Emma focuses chiefly on Emma’s blunders, imperfections, and progression; by letting go of her prideful notions and uncompromising supervision of the people around her, empathizing and identifying with them, and trusting their judgements of themselves, Emma learns that despite the unpredictable world around her, a change she can control is her own growth. Throughout Austen’s Emma, Emma’s navigation through her relationships with Mr. Woodhouse, Miss Bates, and Mr. Knightley reveals the importance of the awareness of one’s self, mistakes, and ability to improve for personal growth.

At the beginning of the novel, Emma Woodhouse is unaware of her flaws or capacity for growth; this unawareness is very much modelled after her father’s. Mr. Woodhouse’s reliance on Mr. Perry’s advice—rather than open-mindedly listening to and considering suggestions of “sea air and bathing” by others, like Isabella’s apothecary, Mr. Wingfield—hints at his lack of faith in his own judgement to discern and choose advice he judges to be astute (81). Instead, Mr. Woodhouse blindly and vehemently follows the advice of someone he is accustomed to following—Mr. Woodhouse fears any change, even that in his own judgement. Apart from not trusting others to make their own choices outside his scope of influence, Mr. Woodhouse does not trust himself to make a choice outside normalcy; his confidence in his knowledge lies not in his trusting his judgement, but in trusting constancy. He does not know enough about himself or the people around him to appreciate the merits of new advice he is given. Taking after her father, Emma’s criticisms of Robert Martin as a “coarse” match for Harriet rely on notions of class to determine his character (19), dismissing him on the grounds of him being a “gross, vulgar farmer—totally inattentive to appearances” (27). She is unable to let go of superficial conventions of class-based gentility to establish her own assessment of a good match, Robert Martin, or of his relationship with Harriet because she, too, does not know enough about her own feelings to discern the significance of the intensity and sincerity behind Harriet and Robert’s relationship.

Taking into account Mr. Knightley and her father’s comments on Emma’s “inherit[ance of] her mother’s talents” (30) and her striking likeness to her “dear mother [who] was so clever” (63) despite Emma’s inability to recall any personal first-hand knowledge of her mother beyond “indistinct remembrance of her caresses” (5), Emma’s lack of understanding of herself and pride in her own cleverness becomes understandable. The repeated comparisons drawn between herself and an idealized memory of a mother she can hardly remember has led to a lack of understanding of her flaws. Her father’s repeated praise of her further inhibits any growth. As his sole caretaker who “spared no exertions to maintain” her father’s happier dispositions (8), Emma is largely responsible for her father’s comfort and soothing his fear of change, which “made it necessary to be cheerful” (7). While his praises of her—such as “Emma never thinks of herself, if she can do good to others,” are in part due to his sincere affection for his daughter, the absolute terms he regularly employs, such as “never” and “always,” also stem from his desire for her to never change, stifling any desire or decisive actions on her part towards growth (12). As perfection cannot be improved upon, for Emma, growth has never been a viable option. Her father’s and others’ praises of her are juxtaposed with her description of Harriet, who, according to Emma, was in need of “more knowledge and elegance to be quite perfect” (19). The contrast between descriptions of her “being thought perfect by every body” and Harriet suggests a striking disparity between her and her peers created by the notions of perfection ascribed to her (10). While others are afforded possibilities for growth, she herself is denied this potential, preventing her from relating to her peers’ struggle towards improvement, and isolating her from her peers in addition to possible growth.

Both Emma and Miss Bates are caretakers of their parents, but where Emma’s life revolves around control, Miss Bates possesses little to no control over her life. While Emma is “handsome, clever, and rich,” (5) and can afford not to marry, the unmarried Miss Bates “stood in the very worst predicament,” and relied on the goodwill of others to survive socially (17). A symbol of goodwill—both of her own and of the people around her—Miss Bates earnestly shares “every thing relative to every body” around her while Emma guardedly conceals her schemes and notions, except occasionally to Mrs. Weston and Frank Churchill (68). Much like Harriet Smith who saves scraps from her encounters with Mr. Elton that she keeps and protects, labelling them “Most precious treasures,” Emma, too, cannot help “making a treasure of” insignificant gestures that supplement her secret fanciful notions of the romantic lives of the people around her (265). Where Emma’s concealment of her schemes alienates her from her neighbours who are not privy to her inner thoughts, Miss Bates’ ability to see things plainly and simply offers her a valuable down-to-earth and easy connection with others. Disdainful and unable to see Miss Bates’ and others’ merits, Emma’s sense of superiority blinds her to her own flaws and the potential of more sincere friendships.

However, Emma’s interactions with Miss Bates following the Box-Hill picnic are the first in a series of events that trigger her awareness of her flaws and mistakes. First, she recognizes her blindness towards Miss Bates’ pain and others’ perception of her and when she thinks of her interactions during picnic itself, Emma is “agitated, mortified, grieved, at [… how she could] have been so brutal, so cruel to Miss Bates!—How [she] exposed herself to such ill opinion in any one she valued!” (296). Perhaps recognizing for the first time that she has made a mistake, hurting someone dear to her, Emma becomes conscious of her imperfection; when her father praises her being “always so attentive to” the Bates,” Emma’s “colour was heightened [as she acknowledged] this unjust praise” (303). Only after recognizing her mistake and imperfection could Emma learn to appreciate the merits of others; in contrast to her disdain for Miss Bates due to her snobbish distaste for people who do not adhere to the general standards of decorum, her newfound appreciation for and “most sincere interest” (298) towards Miss Bates is not guided by her society’s expectations of good manners but based on “the good wishes she really felt” and her own experience and sincere admiration for Miss Bates’ earnest generosity (302). Emma’s apology and Miss Bates’ generous forgiving of Emma is an important stepping stone for her awareness and growth, and pave the way for Emma to express the same kind of forgiveness towards Jane Fairfax and Frank Churchill’s own concealment of their affair when they “had suffered, and [were] very sorry” due to her being better able to relate to and empathize with others’ flaws, acknowledging her imperfections and areas of growth she shares with others (349). As such, Miss Bates’ earnest generosity in forgiving Emma’s blind cruelty not only reveals to her her flawed, hurtful behaviour, but encourages her to exercise compassion to her own peers.

Another important catalyst for Emma’s growth, Mr. Knightley’s persistent devotion to Emma’s growth and belief in her capacity for growth ultimately proves fruitful as Emma begins to trust in and act on her own, and others’ capacity for improvement. By focusing on refining Harriet to perfection enough for Mr. Elton and then Frank Churchill, Emma neglects to consider the potential growth marriage offers individuals; she expects people to be fully-formed, perfect individuals before entering a marriage, illustrated by her “throw[ing] in a little improvement to the figure, to give a little more height, and considerably more elegance” to her painting of Harriet to please Mr. Elton—her prospective match for Harriet (38). Despite her clumsy attempts to match Harriet with Mr. Elton and Frank Churchill, Mr. Knightley ends up rendering “the fullest exultation” to Harriet (378) by providing an opportunity for Robert Martin— “to take charge of some papers […] to send to John” when Harriet was staying with Mr. John Knightley—but trusting in their growth and leaving Harriet and Robert Martin to their own judgement to decide on their own relationship (370). By trusting in Harriet’s own growth—her ability to make her own life decisions without Emma’s approval—Mr. Knightley became the true matchmaker between Harriet and Robert. In addition to her apology to Miss Bates, another important step Emma took towards growth was her interactions with Mr. Knightley leading up to their declarations of love as she takes responsibility for her mistakes. Emma’s decision to listen to Mr. Knightley, despite thinking it was to declare his love for Harriet, and to “assist his resolution, or reconcile him to it” is starkly contrasted to her previous covert manipulation of Harriet’s response towards Robert Martin’s own declaration of love (337). Thus, by sincerely trusting Mr. Knightley to “be the best judge of [his] own happiness” (42), and selflessly having Mr. Knightley “speak openly to [her] as a friend”, Emma allows him to declare his feelings for her (337).

As important to her newfound self-knowledge in her capacity for growth is Emma’s realization that growth does not have to occur alone; Emma eventually realizes the impact Mr. Knightley had on her throughout her life, shifting her in the right direction: “from family attachment and habit, and thorough excellence of mind, he had loved her, and watched over her from a girl, with an endeavour to improve her, and an anxiety for her doing right” (326). Emma realizes the possibility of her growing throughout her marriage with Mr. Knightley, thus recognizing her boundless capacity for growth. By opening herself up to the possibility of constant growth, even within a marriage, she allows herself to accept Mr. Knightley’s proposal and love. In this manner, Emma becomes her own matchmaker and creator of her own happiness. Her previous assuredness in her superior knowledge of others cut her off from who others truly were, revealed by her misinterpretation that Elton’s “perception of the striking improvement of Harriet’s manner, since her introduction at Hartfield, was not one of the least agreeable proofs of his growing attachment” as Emma, herself, mistook Harriet for the refinements she made to her manner (34). However, by trusting in her own knowledge of her capacity for growth, Emma learns to trust in others’ capacity for growth as well. By exercising true self-knowledge, acknowledging her imperfections, and relating to others’ own potential for growth—her recognition of Frank Churchill’s capacity for “his character to improve, and acquire from [Jane’s] the steadiness and delicacy of principle that it wants”—Emma realizes that, unlike her perfection in isolation, she does not have to be alone in her growth; within and beyond her marriage, there would be others to guide and relate to her if she decides to let them (352).

The mundane setting and everyday occurrences of Emmashed light on the fact that dramatic life-altering events are not necessary to grow. Rather than limiting ourselves to have to be finished and perfect individuals, trusting in one’s capacity for growth anywhere and anytime allows one to bring earnest self-knowledge and a sincere willingness to grow to our relationships.