A Brief History of Arts One 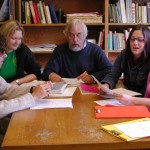 In the spring of 1965 the UBC Faculty of Arts found itself engaged in the most comprehensive re-assessment of the content and structure of its undergraduate curriculum that it had undertaken in almost fifty years. The occasion for this self-examination was the appearance of an elegant and searching, forty-page document bearing the title Discipline and Discovery, which, though prepared by members of the Faculty’s own professoriate, displayed ambitions and style closer to philosophical reflection than to those of the usual committee’s response to the usual bureaucratic commission. (It is significant that the authors of Discipline and Discovery–C W Eliot, K D Naegele, M Prang, M W Steinberg, L Tiger–speak of it as an essay on the Faculty of Arts rather than a report to the Faculty of Arts.) But these were the mid-1960s, and educational re-assessment and innovation were in the air.

Discipline and Discovery identified the upper division of the baccalaureate degree as the time for the achievement of mastery over the elements of one of the accredited academic disciplines; and indeed, a modified version of its recommendations continues to serve as the basis for the Faculty’s present system of Majors. The second year, through provision of a series of carefully worked out surveys, was to supply students with the means for informed choice of the Majors they would take in third and fourth years. But it was in its radical proposals regarding the curriculum for the first year that the essay/report broke most decisively with existing practice.

The argument against existing practice came under three heads. First, and most practically, students coming straight from high school to university were simply no equipped to make the educational decisions (choosing from 44 course covering 27 subjects!) which would guarantee either coherence or real substance in their studies; and the few required courses did no more than mitigate this state of affairs. Secondly, there was “a reservoir of fundamental questions,” central to enquiry in the Humanities, which no single discipline was competent to address and which, more commonly than not, fell into the interstices of the standard disciplines. Thirdly, the steady march towards increasing specialization which characterised modern scholarship meant that some explicit means had to be found to counteract the fragmentation of experience which seemed, perhaps inevitably, to be its consequence.

Accordingly, the authors of Discipline and Discovery recommended that a system of core courses be devised under the rubrics “Man and Society,” “Man and Thought,” and “Man and Expression,” and that these courses, to be taught with heavy emphasis on tutorials and seminars, become the required curriculum for the entire freshman body00at that time numbering some 3,000 students. Not surprisingly, this proved to be too big a pill for the Faculty of Arts to swallow. It therefore appointed a committee charged with the task of bringing these proposals down to practical scale, and that committee in turn recommended (also in 1965) that a “pilot project,” taking in 300 students, be given an experimental run of two years. That “pilot project,” evaluated and approved for continuation after the experimental phase, and running continuously now for 25 years, is essentially the Arts One of the present time.

Between the recommendation of a pilot project in 1965 and its inauguration in 1967 a number of volunteer groups set about the job of working out the details of what should be taught and how. During this time they consulted extensively with others, perhaps most notably with Prof. Joseph Tussman of the UC Berkeley Philosophy Department, who was himself then engaged in overseeing the early days of an ambitious two-year program patterned on Meiklejohn’s experimental college at Wisconsin in the 1930s (see Joseph Tussman, Experiment at Berkeley, OUP, 1968). In these two run-up years Arts One thereby took on new influences and acquired more complex ancestries.

The Experimental College Program died after four years, the victim not of educational failure but of an inability to find an organisational niche in Berkeley’s departmental structure. Arts One, operating out of a dilapidated “temporary” building between Commerce and Education, usually on a thin budget and sometimes on none at all, surviving early charges of dilettantism and 1960s silliness, is now about to celebrate its 25th anniversary. More than 5,000 students have been graduated from the program, taught through the years by as many as a hundred faculty members from around the campus but mostly by a stage army of enthusiasts within the Faculty of Arts itself. A recent evaluation of the program’s accomplishments, prepared by a Dean’s committee under the chairmanship of Prof Egerton, spoke of it in terms with could fairly be described as glowing. More recently still, the program acquired the cachet of favourable mention in Maclean’s Magazine. Its reputation, in truth, is now distinguished and nation-wide.

Meanwhile, the freshman year in UBC’s Faculty of Arts looks much the same as it did to the authors of Discipline and Discovery. Whether that should be a matter for concern is not fur us to say. But those of us who have been associated with Arts One over the last quarter century are happy to have had the chance of offering an alternative; happier still, dare we say, that a number of others now think that it is an alternative which has something like an exemplary look to it.