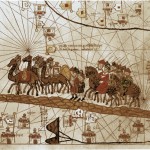 What is exploration and what have we encountered on exploratory journeys? Adventures and explorations take on many forms and are driven by diverse and often conflicting motivations, including a quest for knowledge and experience or a desire for power through conquest. Pursued with the help of a guide or prodded on by the shock of an intruder, explorations have many points of departure and can lead in unanticipated directions; they may seek after far horizons or probe the hidden realms of our own minds.

Explorations can unfold in space and in time, and through physical or imaginative journeys via histories or novels, drama or film, philosophy or poetry, science or religious thought. From encounters between the familiar and the foreign, the ancient and the modern or the literal and the symbolic, this course charts an itinerary of explorations that mark the pathways of ceaseless human ambition. We will assess the rewards and the costs of such pursuits, considering their moral, political and psychological impact on individuals and on societies. With such rich literary, historical, philosophical and cultural encounters to explore, who knows where our odyssey might take us?